Reading Paradise Lost and other books.

Stealing food.
Playing with children.
Getting revenge on his creator.

Integrate himself into society and have a family (failed).

Force Doctor Frankenstein to make him a bride (succeeded, sort of).
Seek revenge on his creator (succeeded, but later regretted it).

Tragic Monster
Frankenstein's Monster (also called Adam, the Monster, Frankenstein's creature, or just Frankenstein) is a fictional character that first appeared in Mary Shelley's 1818 novel Frankenstein; or, The Modern Prometheus, as well as the classic 1931 film of the same name. In popular culture, the creature is often referred to as "Frankenstein" after his creator Victor Frankenstein, but in the novel the creature has no name. He does call himself, when speaking to Victor, the "Adam of your labours". He is also variously referred to as a "creature", "fiend", "spectre", "the demon", "wretch", "devil", "thing", "being" and "ogre" in the novel.

The Monster made his first appearance in the 1818 novel Frankenstein, or The Modern Prometheus. He is described as having wrinkled skin which barely hid the blood vessels, black lips, black hair, and yellow eyes. He was created on a rainy November night in the late eighteenth century Ingolstadt, Germany, by the medical student Victor Frankenstein. Frankenstein is so horrified by his creation that he flees the house, leaving the Monster to his own devices. The Monster takes a jacket to clothe himself, and eventually wanders off into the wild. He spends a lengthy period of time learning to survive. Any humans he comes across are so frightened by his appearance that they run from him, just as Frankenstein had done.

The Monster eventually takes up abode in a small hovel that abuts a cottage. He listens to the inhabitants, the De Lacey family, through a chink in the wall and learns to speak and read from their example. His first reading materials are several books that he finds in a castoff suitcase, including the works of Milton, Plutarch, and Goethe. The Monster also reads a series of papers he found in his jacket, which turn out to be Frankenstein's notes.

Through these, he discovers his origins, and learns that Frankenstein lives in Geneva, Switzerland. The Monster grows to love the De Laceys during his time as their "neighbor", and decides to reveal himself to the blind father while his grown children are out. However, the children return and discover him with their father, and drive him from the house. Enraged at how the whole of humanity has treated him, the Monster sets fire to the cottage, and swears revenge on Frankenstein for bringing him into a world that hates him.

In order to collect his thoughts, Frankenstein ascends into the Alps. The Monster confronts him there and pressures him into creating a female creature so he can have a mate; he promises that if he is given this, he will disappear and never trouble humanity again. Frankenstein agrees, and travels to Scotland, where he begins the process of creating a female. The Monster follows him and watches with eager anticipation. At last minute, however, Frankenstein decides not to go through with it, and destroys the creature. The enraged Monster swears to Frankenstein that he will be with him on his wedding night. True to his word, the Monster kills Frankenstein's new bride, Elizabeth LaVenza, as well as his best friend, Henry Clerval; he is also indirectly responsible the death of Frankenstein's father, who dies of grief after Elizabeth's body is found.

Now with nothing to live for, Frankenstein swears vengeance and pursues the Monster to the Arctic, where he falls into the freezing waters and is picked up by a ship heading for the North Pole. Frankenstein tells his story to the expedition's leader, then dies of pneumonia. The Monster shows up not long after to gloat over Frankenstein's body, but upon seeing his creator dead it is overcome with remorse, for the only man who knew the creature is now dead and the monster is truly alone in the human world. He announces that he will reach the Pole and destroy himself on a funeral pyre. He jumps from the ship, and disappears into the distance. The captain of the exploration ship, realizing a lesson from listening to Viktor's story, abandons his own obsession towards North Pole and returns home. 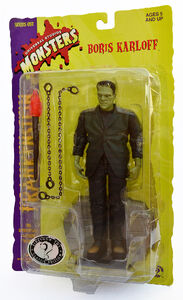 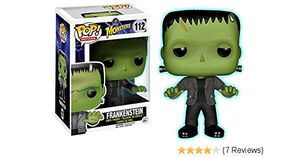 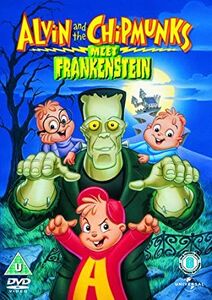 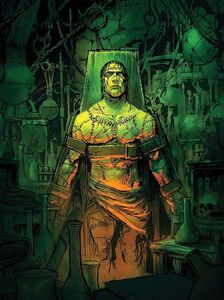 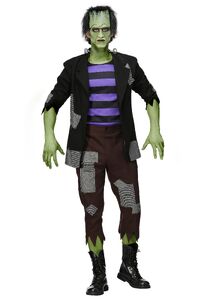 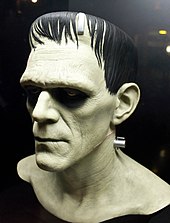 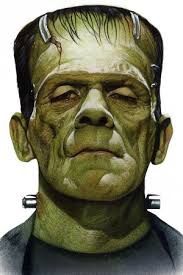 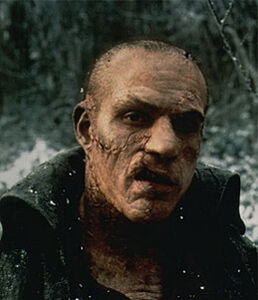 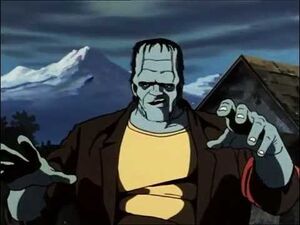 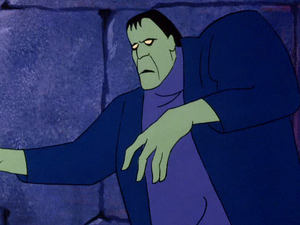 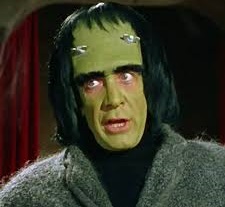 Retrieved from "https://hero.fandom.com/wiki/Frankenstein%27s_Monster?oldid=1945364"
Community content is available under CC-BY-SA unless otherwise noted.