Frankie Greene is Doc Greene's daughter and a friend of Cody Burns. She is somewhat suspicious of the Rescue Bots. In "Countdown," it is revealed that Francine is afraid of the dark. In "The Haunting of Griffin Rock," it is revealed that Francine's middle name is Elma named after Griffin Rock's first scientist Elma Hendrickson. Near the end of Season One, Frankie learns the truth about the Rescue Bots after she was saved by Heatwave. 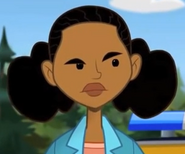 Add a photo to this gallery
Retrieved from "https://hero.fandom.com/wiki/Frankie_Greene?oldid=1769992"
Community content is available under CC-BY-SA unless otherwise noted.