Being with family and friends

Franklin Richards (currently known as Powerhouse) is a hero from Marvel comics, most associated with the Fantastic Four, he is the son of Invisible Woman and Mr. Fantastic but due to exposure from cosmic radiation while in the womb was born a mutant with unimaginable reality-warping abilities.

Franklin is considered the most powerful mutant in all of Marvel comics, with some rare exceptions (such as the villainous Marquis of Death) - as an adult Franklin was shown to have enough power to make Galactus into his personal Herald and even as a child Franklin has sufficient power to create pocket universes and is at least as powerful as a Celestial.

Despite all his powers Franklin is still a child and thus mostly wishes to have fun, learn and be with his friends and family - as an adult Franklin is shown to have become an immensely successful cosmic-tier hero who guards the entire multiverse and easily ranks as one of Marvel's most powerful heroes.

He was created by the late Stan Lee, and the late Jack Kirby, and first in Fantastic Four Annual #6 in November 1968.

Franklin Benjamin Richards was born in New York City, and is the son of Reed Richards and Susan Storm, better known as Mister Fantastic and the Invisible Woman, and is the nephew to Johnny Storm, better known as the Human Torch. Both of his parents and uncle are superheroes, and are three of the founding members of the Fantastic Four, the first modern team of superheroes. The heroes gained their powers as a result of cosmic radiation exposure during a flight in outer space, and would effect Franklin before his birth.

The radiation somehow affected Susan's body in such a way as to give her serious difficulties giving birth to him, and her blood cells were observed to be carrying a strange form of energy that threatened the lives of both herself and the baby. Reed and his teammates, the Human Torch and the Thing journeyed into the anti-matter dimension called the Negative Zone to find the only means to save their son - the Cosmic Control Rod wielded by Annihilus. Reed succeeded in obtaining the Rod, and drained energy from it into a special container, which he and his two allies brought back to their own dimension.

Reed succeeded in using the energy from the Rod in bringing the energy in his wife's blood under control, and she safely gave birth to their healthy son. The infant was named Franklin Benjamin Richards, in honor of his late grandfather, and Reed's best friend, Ben Grimm. In his early years, the sorceress Agatha Harkness acted as his nanny and protector. However, the cosmic radiation that have gave Reed and Susan their powers also resulted in affecting the genetic structure of their son, who was born a powerful mutant. Unlike most superhuman mutants, whose unusual powers do not emerge until the mutant reaches puberty, Franklin began manifesting his powers at a very early age.

The first indication of his powers was shown when the Frightful Four had beaten the Fantastic Four, as Franklin used his power to wake up the Thing and this allowed them to achieve victory. In the normal course of events, Franklin's psionic powers would presumably emerged powerfully as he grew older until they reached their full potential.

As a child Franklin displayed a wide array of abilities on a cosmic scale and could alter reality on very large scales, he was shown to casually create a pocket universe on his own and with the aid of his father he was shown capable of creating multiple universes and aided in repairing the entire multiverse.

as an adult Franklin's powers increased even further and he was capable of making Galactus into a "Herald" and was stated by numerous sources to, at minimum, being on the level of the Celestials - cosmic entities so powerful even Galactus has been known to fear them.

Franklin is still a child and thus in general his personality varies as any child's would, he is usually a rather benevolent character and has no real desire to harm anyone - while some stories do show Franklin with darker elements to his character it is usually seen as the exception rather than the norm, even as an adult Franklin seems to be a hero at heart and in many ways follows in the footsteps of his family. 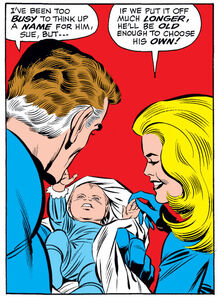 A baby Franklin with his parents. 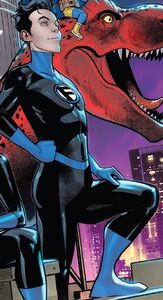 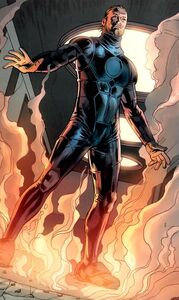 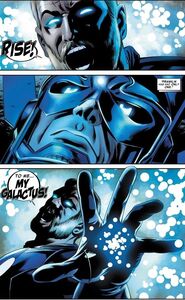 an adult Franklin makes Galactus into his "Herald".