Shipwright of the Straw Hat Pirates

To Help and Protect His Friends, create and travel with a dream ship which would experience countless battles, can overcome extreme hardships and can reach the end of the Grand Line.

Franky is one of the main characters in One Piece and the shipwright of the Straw Hat Pirates. He is a 36-year-old cyborg from Water 7 and was introduced in the story as the leader of the Franky Family, a group of ship dismantlers. He was originally named "Cutty Flam" until he threw away his original name for his nickname per the request of Iceburg to hide his identity..

Franky and his followers were originally introduced as antagonists of the Water 7 Arc against the Straw Hats until circumstances forced them to become allies. At the request of the Franky Family, Franky was allowed to join the Straw Hats to fulfill his dream of creating and riding a ship capable of circum-navigating the world, the Thousand Sunny. He is the eighth member of the Straw Hat crew and the seventh to join Luffy's crew. He is also the second member to have been a former antagonist (the first being Nico Robin). He is originally from South Blue, which he left 32 years ago as a kid of four years of age. His first bounty was 44 million Berries after he defeated Fukuro of CP-9 and wage war against the World Government. His current bounty is 94 million Berries after he defeated Señor Pink of the Don Quixote Pirates but the photograph wasn't him but his Franky Shogun.

As a direct result of the modifications that he conducted upon himself as well as years having spent as a ship dismantler, bounty hunter, and street thug in Water 7, Franky is a powerfully built man with a height of at least seven feet, making him the second-tallest member of the Straw Hat crew. His forearms are relatively enormous while his biceps are comparably small. He has brightly-colored blue hair and blue star tattoos on his forearms. His choice of clothing usually comprises of a speedo, which causes people to call him a pervert, and an open loud Hawaiian "Aloha" shirt with a large golden chain necklace around his neck.

During his first appearance in the Water 7 Arc, Franky wore a masked costume as a disguise. But after discarding this disguise, for the rest of the arc all the way up to the end of the Post-Enies Lobby Arc, he wore a red Hawaiian shirt, with lime green palm trees decorating it.

During the Thriller Bark Arc, Franky wore a yellow shirt with purple trident-like symbols on the sides and a large one on back.

Near the end of the previous arc all the way up to the Sabaody Archipelago Arc, Franky switched to wearing a purple verison of his Hawaiian shirt.

During the Straw Hats separation, Franky wore a red coat to protect himself from the cold while on Barujimoa, But after blowing up Vegapunk's laboratory, the skin on his face was burned off, revealing his exoskeletion underneath. Which he covered up with a tiger skin rug.

He also has a pair of sunglasses which he usually wears when things start to get serious.

Franky is first shown to have a hair in the style of a buzz cut, and later on, he reveals that his hair is now controllable and can change different styles instantly by pushing down on his nose for more than three seconds.

He also has two stitch-mark scars on his torso running down from the back of his neck indicating that he had sewn his skin back on, making it seem more than likely that he has finally fashioned his metal endoskeleton to wrap around his entire body, and not just his visible front (since the initial operation to become BF-36 was done by himself, he could not do work on his own backside).

His shoulders, torso, and arms are also much bigger than before, and with studded hands that look almost robotic in appearance, but he also revealed that inside of his huge arms he still has a set of normal-sized robotic hands. He now appears to be wearing metal rigged suspenders. He has replaced his elbows with large, light blue hinges, his shoulders with a large red ball and socket joint with "BF-37" written on them, and his forearms with large, light blue cubes, with his trademark star retattooed being split by an edge.

These new features house upgrades he gave himself during the last two years, but their true potential and ability has yet to be fully shown.

He now wears a red coconut tree-motifed Hawaiian shirt and red speedos. After all these modifications to himself, he is now currently the second tallest member of the crew.

While on Punk Hazard, he was given a large double-breasted black coat by Kin'emon, for the cold, using his Fuku Fuku no Mi (Garb Garb Fruit) Devil Fruit ability.

As a shipwright, Franky can create or repair ships, boats and rafts.

As a cyborg, Franky has superhuman strength, speed, and durability. He can swim faster than normal humans. His arm attached with chains to launch attacks against enemies. He can shoot fireballs from his mouth. His fart allowed him to not only escape but freeing himself from chains. He can create cannonballs from his forearm. After timeskip, Franky made more enchantments to his body. He can roll like a tank. He can use hands as guns. He shoot laserbeam from his hands. His punches are more demonstrating than his pre-timeskip. He can fire cannons from his shoulders. 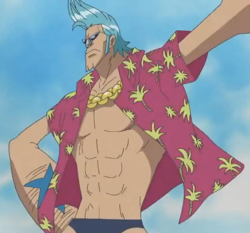 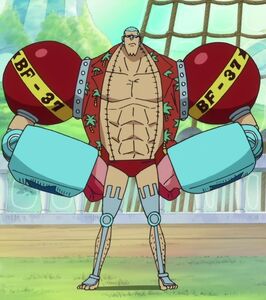 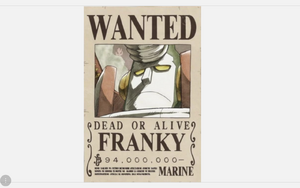 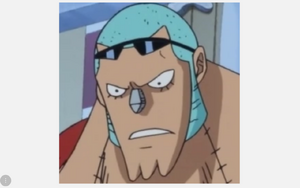 Franky with his new standard hairstyle 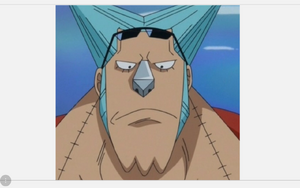 Franky with his pointy hair style 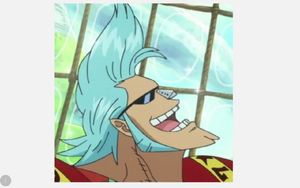 Franky with his original hairstyle 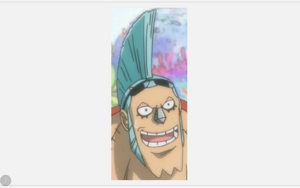 Franky with a mohawk hairstyle 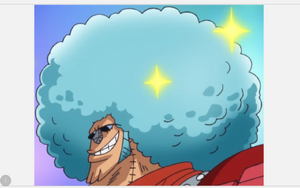 Franky with an afro 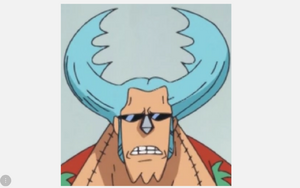 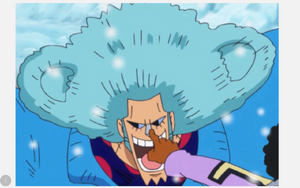 Franky with a bear head hairstyle 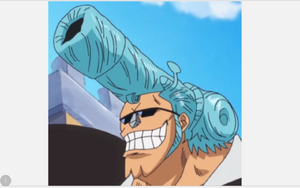 Franky with his battle hairstyle 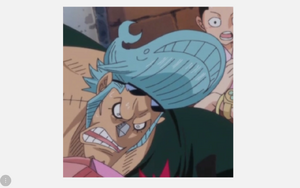 Franky with a whale hairstyle 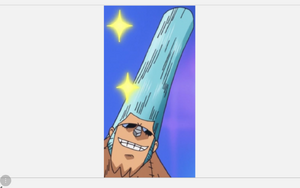 Franky with a tall hairstyle 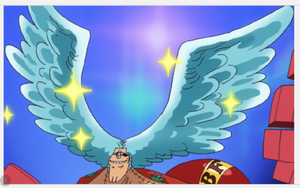 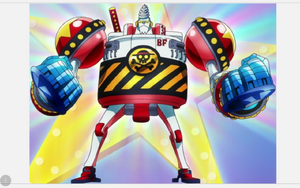 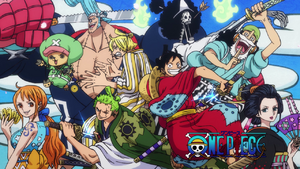 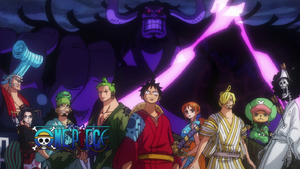 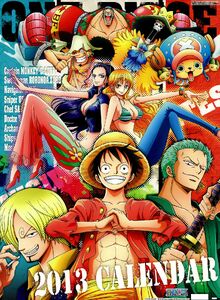 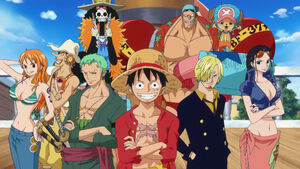 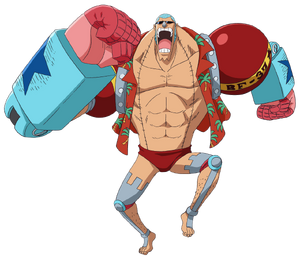 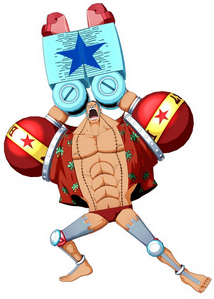 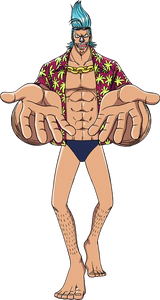 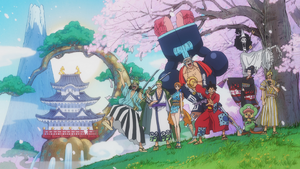 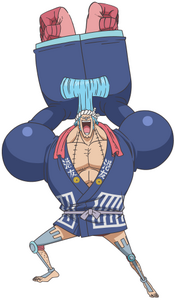 Franky's outfit while in Wano Country.
Add a photo to this gallery

Retrieved from "https://hero.fandom.com/wiki/Franky_(One_Piece)?oldid=1944823"
Community content is available under CC-BY-SA unless otherwise noted.