To protect city from nightly crimes.

Freakazoid (real name Dexter Douglas) is the main titular protagonist of the underrated 1995-1997 Steven Spielberg/WB cartoon series of the same name, a cameo guest-star character in Animaniacs and Pinky and the Brain, and the guest-star deuteragonist in the Teen Titans Go! episode "Huggbees".

He tries to protect his city from several villains.

He was voiced by Paul Rugg.

Freakazoid was born on Christmas Day when Dexter Douglas entered a computer code by accident, activating a flaw in his brand new Pinnacle computer chip. He was suddenly zapped in the computer, where he absorbed the knowledge of the Internet and gained superpowers. His initial transformations were unstable and unpredictable, but Dexter soon learned that he could change into Freakazoid by saying "Freak out," and back to Dexter by saying "Freak in."

His first enemy was Armondo Guitierrez, the CEO of Apex Computers, who had covered up the flaw in the Pinnacle Chip by attempting to murder the employee who discovered it, Roddy MacStew. Once Guitierrez learned of Freakazoid's existence, he captured Dexter and Roddy, hoping to harness the powers for himself. Freak was convinced by police sergeant Sergeant Mike Cosgrove to become a superhero to impress the ladies.

Freakazoid subsequently achieves a degree of fame, saving the free world in very publicized fashion on at least one occasion and becoming acquainted with the President of the United States (who attends Freakazoid's massive birthday celebration at the Happy Holiday Hotel, along with many other luminaries).

Freakazoid possesses all the knowledge of the Internet, but at great cost to his sanity. He behaves in a very silly fashion and often defeats villains in unorthodox ways, such as subjecting Longhorn to the seventh-inning stretch or getting Cobra Queen to say tongue twisters until she passes out (Freakazoid admits that he has no idea why this worked). He also frequently breaks the fourth wall and is very aware that he is on a TV show. When Freakazoid breaks character on-set, he tends to talk in a voice similar to Jerry Lewis's "serious" voice.

Although Freakazoid and Dexter share the same body and also seem to share one another's knowledge, they seem to be separate entities. For instance, Freakazoid wishes to cut Dexter out of the main title of the show and gets annoyed when an episode spends too much time with Dexter. Still, Freakazoid sympathizes with Dexter. He likes to wrestle with Dexter's brother Duncan Douglas in revenge for Duncan's bullying of Dexter and initially tries to get Valerie to like Dexter (before deciding to be shallow and just letting Valerie kiss him as Freakazoid).

When Dexter isn't Freakazoid, Freakazoid spends his time in an area of Dexter's brain called the Freak-a-Zone, where he reflects, has profound thoughts, and watches Rat Patrol. Freakazoid sometimes speaks to his inner child, whom he has named Billy. Billy claims to have grown quite large.

Freakazoid loves hospital water but hates hospitals because they store blood in refrigerators. He occasionally picks up some off-the-books additional cash by doing skywriting for the Happy Clown Cafe. His favorite ancient race is the Ancient Egyptians, partly because you can't even see the spackle in their buildings.

Super intellect: Freakazoid has all the knowledge on the internet, but because of the ever-increasing knowledge gathered there, it leaves him mentally insane.

Superhuman Strength: Freakazoid has a varying degree of superhuman strength, sometimes only slightly stronger than normal people, while at other times stronger than Cave Guy.

Superhuman Speed: Freakazoid can move at light speed, for example when he once crossed the globe in mere moments to yell at a Tibetan monk for raking too loudly.

Cartoon Physics: Freakazoid can impart the laws of physics in absurd ways to a level that even rivals those of Animaniacs.

4th Wall Awareness: Freakazoid has the knowledge that he is in a television show and that an audience watching him. He relatively often communicates and interacts with the audience who watch him, or the people animating him.

Telekinesis: Freakazoid can in very rare cases use telekinesis in a state of high anger. He only shows this feature in "Two Against Freak".

Freakazoid has a base called The Freakalair which was built by his mute butler, Ingmar. It can be accessed directly from Dexter's bedroom via an elaborate Freak-a-Fall roller coaster in Dexter's closet.

The Freakalair has a Hall of Nifty things to Know to contain all the knowledge of our world, as well as a mad scientist lab. Freakazoid also has his very own car named the Freakmobile. He keeps his car in the Hall of Freakmobiles, which contains countless identical Freakmobiles. His favorite is the one that runs.

Freakazoid's first ally is his mentor, Roddy MacStew, who discovered the Pinnacle flaw and tracked Dexter down. Roddy poses as Dexter's driving instructor as cover for their friendship. He coaches Freakazoid in the use of his powers and helps on missions. He is the only person who may understand the powers of the Freakazoid even better than Dexter/Freakazoid.

Freakazoid's best friend and primary ally are police Sergeant Mike Cosgrove. Freakazoid met Cosgrove at the end of his first adventure, and the two quickly found that they shared the same tastes in both the unique and the banal. Cosgrove is one of the few people Freakazoid trusts with his secret identity.

Freakazoid's girlfriend is Steff. Ironically, Dexter has a crush on Steff and she frequently blows him off, not realizing that she is dating his alter ego. Steff eventually learns that Freakazoid is Dexter when Cosgrove blurts it out. Freak becomes involved with Steff sometime after "Dance of Doom," wherein he seems to like Valerie more.

Freakazoid is on a neverending search for the perfect sidekick, but all of his sidekicks prove short-lived. Previous sidekicks include Handman (Freakazoid's right hand with a face drawn on it; he tragically fell in love and left Freakazoid's service), Expendable Lad (who received a career-ending clavicle injury from The Milk Man), Foamy the Freakadog (Freakazoid's favorite sidekick; unfortunately, the rabid Foamy regularly tried to murder Freakazoid even more forcefully than the villains did), and FanBoy (technically, Freak never accepted Fan Boy as his sidekick, but rather spent the episode trying to get rid of him). Emmitt Nervend is also seen as a former sidekick in the Hall of Sidekicks.

Freakazoid was designed by Bruce Timm. Mike Allred, a creator of the comic Madman, has claimed that Timm told him Madman was an influence on the design of Freakazoid. When Timm left the project, Tom Ruegger was brought in to develop the character and came up with the madcap personality. Paul Rugg started as a story editor and writer on the show but also became the voice when all of the auditioning voice actors were trying to be too manic and do a Robin Williams-type shtick. The producers were unable to give the auditionees any feedback since they had no idea what voice they wanted; they simply knew that they did not want the version of the character they were hearing in auditions. Finally, in hearing Rugg give readings to the auditionees, Ruegger realized that he should do the voice. Rugg auditioned for the role by reading the episode "Dance of Doom" and improvising extensively between the scripted lines. The tape from that audition became the final audio for the episode.

He is partially a parody of Shazam, including the "Freak out!" transformation. 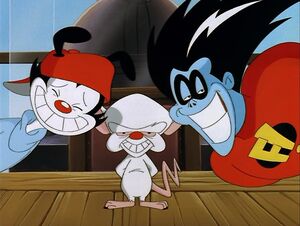 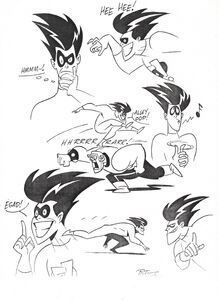 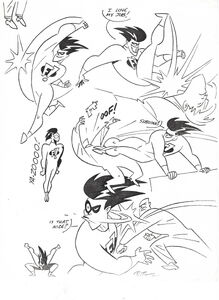 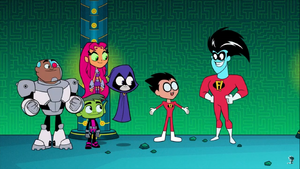 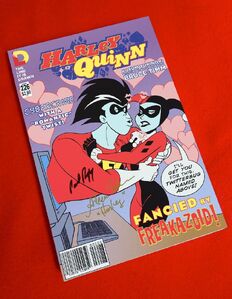 Add a photo to this gallery
Retrieved from "https://hero.fandom.com/wiki/Freakazoid?oldid=2191668"
Community content is available under CC-BY-SA unless otherwise noted.