Frederick "Fred" Holywell is the nephew of Ebenezer Scrooge and the tetartagonist in Charles Dickens' A Christmas Carol. He is also Scrooge's only living relative.

Fred is also a gentleman of some means, but unlike his miserly uncle, he is a kind-hearted, generous, cheerful, and optimistic man who loves Christmas. Fred believes that there is good to be found in everyone, even his misanthropic uncle Scrooge, whom he invites to Christmas dinner every year despite constant rejection. Fred believes that the good in Scrooge can be brought to the surface.

Fred is the son of Scrooge's sister Fan/Fran, who died many years before the story begins. Scrooge, who loved his sister very much, has never accepted her death, and the sight of Fred unfailingly reminds him of the grief he still feels from her loss. This is one reason for Scrooge's antipathy towards his nephew; another is Fred's unceasingly cheerful attitude, which is anathema to Scrooge's cynical personality. 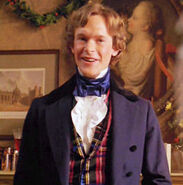 Retrieved from "https://hero.fandom.com/wiki/Fred_(A_Christmas_Carol)?oldid=2108577"
Community content is available under CC-BY-SA unless otherwise noted.