Operating the Egg Sleigh
The Egg of Destiny

To get a job (succeeded)

Fredrick "Fred" O'Hare is the son and eldest child of Henry and Bonnie O'Hare, the older brother of Samantha (Sam), the adoptive brother of Alex, the current Co-Easter Bunny alongside E.B. and is the deuteragonist of the 2011 film Hop.

He was portrayed by Colton Ray as a child and James Marsden as an adult, who was well known for playing Cyclops in the X-Men franchise, Prince Edward in Enchanted, Tom Wachowski in the Sonic the Hedgehog film series, and voiced Diggs in Cats & Dogs: the Revenge of Kitty Galore.

Fred is first seen as a young boy waking up one night and seeing The Easter Bunny Mr. Bunny and his rabbit helpers leaving Easter treats in his garden. Fred picks up a camera and goes downstairs to take a picture of the scene, only to find Mr. Bunny and his helpers gone, but finds a baskets of candy and a chocolate bunny on his doorstep.

Though unseen, Fred told others of him seeing the Easter Bunny, but no one believed him. 20 years later, a now adult Fred is still living at home with his parents, much to their annoyance. Fred's father Henry tells him to get a job and house of his own. Taking pity on Fred, his sister Sam gives him details of a job interview a video game company her friend works at. As Fred hasn't a house either, Sam gives him the job of housesitting her boss's mansion in Beverley Hills as she cannot do it due to her boss having dogs (which Sam fears). On the way to Sam's boss's house, Fred hits something with his car. After coming out of his car, Fred sees that it was a rabbit he had hit. Thinking that the rabbit is badly injured, Fred prepares to put the rabbit out of it's misery. Suddenly, the rabbit talks, causing Fred to panic and run into Sam's boss's house. The rabbit follows him and introduces himself as E.B. (who is Mr. Bunny's son) and asks for food. Fred gives E.B. turkey jerkey (which the rabbit promply spits out) before giving him a carrot. E.B. pretends to be more hurt than he is in order to make Fred let him stay in the house. Fred makes a bed for E.B. in the house's garage with a food and water bowl, much to the rabbit's dismay. The next day, Fred finds that E.B. has messed up one of the house's bedrooms and flooded the bathroom. An annoyed Fred attempts to release E.B. into the wild, but E.B. changes his mind by claiming to be the Easter Bunny. Fred then goes to the job interview and tells E.B. to stay in the car. The interview goes well for Fred until E.B. accidentlly ruins it whilst trying to escape from The Pink Berets (who had been sent to find him by Mr. Bunny). Later at a diner, E.B. makes a deal with Fred, saying that he will leave his life if he helps him audition for "Hoff Knows Talent".

Upon arriving back at the house, Fred sees that Sam is visiting and distracts her whilst E.B. cleans upstairs. Before leaving, Sam tells Fred to remember to come to their adoptive sister Alex's school play. Fred takes E.B. to audition for "Hoff Knowns Talent" were David Hasselhoff is impressed by E.B.'s drumming skills and asks if he will be available for a live taping of the show that coming Saturday, to which E.B. agrees. After leaving the audition room, Fred and E.B. prepare to go their seperate ways, but E.B. changes his mind when he sees the Pink Berets and ends up convincing Fred into letting him come with him to Alex's play.

At the play, E.B. hides in Fred's bag, but is annoyed at Alex's bad singing and panics when he mistakes three children dressed as rabbits as the Pink Berets and escapes the bags and onto the stage. Fred follows E.B. and picks him up and pretends to the audience that the rabbit is a ventriloquist's dummy and feigns an act by singing I Want Candy. Henry and Alex are angry at Fred for the upstaging, but upon looking at many pictures of the Easter Bunny, Fred becomes convince that he could take on the job. Later that night, Fred tells this to E.B., who is at first skeptical, but changes his mind after seeing Fred painting eggs and agrees to train him.

On Saturday, Fred wakes up and finds the Pink Berets in the kitchen and is knocked out by them, after they believed that he killed E.B. and cooked him (when in fact that it was a decoy E.B. made from a frozen turkey and his clothes to stop the Pink Berets following him to the "Hoff Knows Talent" show). Fred wakes up and finds himself tied to a pillar in the Easter Factory where he is accused of killing E.B. by Mr. Bunny's second-in-command Carlos. After Carlos and the Easter Chicks take over the factory, Fred and Mr. Bunny and tied in black licorice and set to be lowered into a vat of hot liquid candy. After E.B. arrives to take on Carlos, Fred manages to free himself and Mr. Bunny. After Carlos is defeated, Mr. Bunny (after hearing from E.B. about Fred's wish) calls Fred forward and tells him and E.B. to place their forefingers on the Egg of Destiny (the magic staff of the Easter Bunny) and declares them Co-Easter Bunnies in order to balance the workload so E.B. can continue with his ambitions of being a drummer. Fred and E.B. then leave the factory in the Egg Sleigh to deliver eggs and candy to the children of the world.

The next morning, Fred is seen eating with his family and compliments his mother's food, saying that she should open a restaraunt. Fred then prepares to leave with E.B. in the Egg Sleigh, but Henry calls to him and says that he is proud of him. Fred and E.B. then fly off in the Egg Sleigh as Fred's family watch on.

Fred is last seen in the post credits scene giving an Easter basket to a Chinese woman (whom Mr. Bunny had attempted to give an Easter basket to earlier) and wishes her a happy Easter in Chinese, which woman accepts and gives him a reply. E.B. then aks Fred what the woman said, to which Fred replies in Chinese that she thinks that Easter is cool, but talking rabbits freak her out. 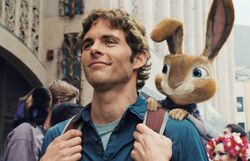 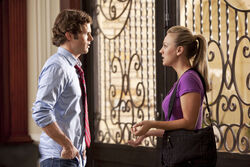 Fred with his sister Sam

Fred and E.B flying in the Egg Sleigh.