Become rich and famous (originally); Kill Michael Myers (succeeded only in defeating him)

Freddie Harris was an entrepreneur who started Dangertainment. His main goal was to became rich and famous. To help him achieve this goal he got himself an assistant named Nora Winston. Freddie had a passion for kung-fu movies and practiced martial arts. He figured the best way to start his internet reality show was to focus on the Myers house. On October 30, 2002, Freddie and Nora met the six Haddonfield University students they had selected. Only one of the six had interested Freddie and that was Sara Moyer who later came to his motel room asking to drop out of the show. Freddie had managed to convince her that sleep on it as he told her she was the most real of all six. The next day Freddie told the reporters that everthing was real and that nothing around the house was messed with. This later proved to be false as Freddie and his team had set up fake evidence that implied that Michael Myers was abused as a child.

Later on that night, Freddie had dressed up as Michael Myers to spice things up on the show. As soon as he entered the house, he saw the real Michael Myers showed up but Freddie thought it was Charley and told him to get in the garage with Nora or else he would ruin everything. Michael did as he was told and left. Moments later Freddie grabbed Sara but was attacked by Jim Morgan. Freddie told Jim, Sara and Rudy to turn off their cameras while he explained that everything was a hoax. He told them that he knew that if he didn't set up anything the show would fail. He asked them to keep quiet about it and went on his way.

Later he found that everyone in the house but Sara was now dead and they grouped together and tried to find their way out of the house. They then saw Michael standing in the doorway and Freddie tried to tackle him down but Michael tossed him across the room. Freddie tried to fight off Michael with some of his martial arts skills but they didn't do much against Michael. Sara tried to choke Michael with a camera cord but she too was unsuccessful in stopping him. Freddie then managed to kick Michael out of the window. Thinking he was now dead, Freddie and Sara started to go downstairs and get out of the house but Sara's friend Deckard informed them that Michael was still alive and still in the house. At that moment, Michael appeared behind them and stabbed Freddie. Michael left him for dead while he chased after Sara.

Freddie managed to recover from his wounds and followed Michael to the garage and found the garage was now burning and Sara was helpless. Freddie got a shovel and tried to attack him with that but it broke. Freddie tried to attack him with the stick but Michael overpowered him and pushed him towards the wall. Michael prepared to stab Freddie who grabbed an electric cord and shocked Michael who fell back and tangled himself in cords. Freddie then set Michael on fire and carried Sara out of the garage. Later he saved Sara from a pack of reporters, as he figured she had enough for that night. Freddie and Sara later looked at the face of Michael Myers' face. 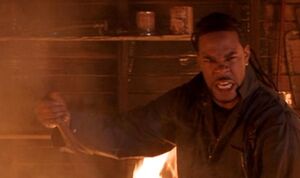 Freddie as he prepares to fight Michael 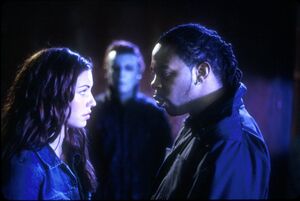 Add a photo to this gallery
Retrieved from "https://hero.fandom.com/wiki/Freddie_Harris?oldid=1777411"
Community content is available under CC-BY-SA unless otherwise noted.