Protect Knothole Village and the world from the Eggman Empire.

The Adventures of Sonic the Hedgehog

Following Dr. Robotnik's coup d'état, which gave the doctor control of the Kingdom of Acorn, a group of old Mobian soldiers who founded Knothole Village formed the first team of Freedom Fighters to oppose Robotnik's growing empire and protect their village from his forces. They raided Robotnik's capital of Robotropolis on many occasions to steal its resources and lured SWATbots into the forest to destroy them. However, during a mission to save the kingdoms rightful ruler King Acorn, the team was lead into a trap after being betrayed one of their own and they were all robotized by Robotnik then sent to the Zone of Silence.

Princess Sally Acorn was inspired by the Original Freedom Fighters actions and eventually formed a freedom fighting team of her own called the Knothole Freedom Fighters. Together, the new Freedom Fighters were able to shut down many of Robotnik's factories, destroy various Badniks, foil Dr. Robotnik's plans and keep Knothole Village safely hidden from enemy forces. Eventually, the war against Robotnik ended after the tyrant is vaporized by his own weapon.

King Acorn is rescued by the Freedom Fighters from his imprisonment inside the Zone of Silence and resumes his role as the kingdoms ruler. With Robotnik gone, the King felt their was no more need for the Knothole Freedom Fighters and had them disband in favor of his Royal Secret Service and the reassembled Royal Army. However, King Acorn changed his tune when an alternate version of Robotnik known as Dr. Eggman began his invasion of the kingdom. He reformed the Knothole Freedom Fighters who returned to their old headquarters and restored contact with the various allies they have made over the years to assist in battling against the vast Eggman Empire.

As the years passed, more freedom fighting teams would form to resist the Eggman Empire's forces in other regions of Mobius. However, the Knothole Freedom Fighters eventually suffered a major defeat after Dr. Eggman sent out his Egg Fleet and launched an all-out assault on Knothole, reducing it to rubble. Most of the team's members and allies are captured using teleportation beams while the Freedom Fighters de-facto leader Sonic the Hedgehog is viciously beaten by Eggman in his Egg Beater battlesuit. Despite all this however, Sonic and the Freedom Fighters remaining members still managed to save everyone by having them sent to Nanite City, a holding of the Eggman Empire which Freedom Fighter Nicole took control of and had transformed into New Mobotropolis. When Dr. Eggman attempted to take back his city, Sonic worked together with the rest of his teammates and allies to defeat him.

In the Pre-Super Genesis Wave continuity, The Freedom Fighters originally used guerrilla tactics due to their limited numbers. However, they eventually chose to use more direct assaults in later years.

It’s unknown if guerrilla tactics were ever used in the Post-Super Genesis Wave continuity, as the groups more frontal methods of attack still seemed to be used in recounts of past events. 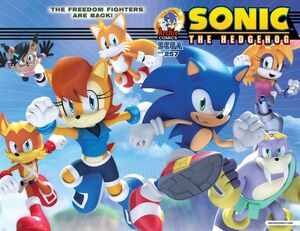 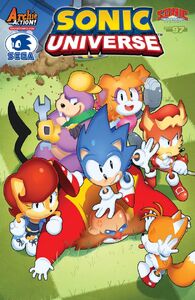