Frogger is the main protagonist in almost every video game he appears in. He also became the lastest team member of a heroic team called F.I.R.S.T. (Frog International Rescue Support Team) in Frogger's Adventure: The Rescue.

Over the coarse of his video game career, Frogger's character has undergone drastic changes.

Frogger's initial appearance was that of a semi-realistic-looking frog. Frogger was given a redesign in 2001 with the release of The Great Quest. He was given an anthropomorphic design along with a t-shirt, a vest, and shorts.

In The Rescue, his look changed to a more strong appearance. As defender of Firefly Swamp, his many adventures carried on through 2001 to 2005, before a reboot with a new video game,My Frogger Toy Trials, brought it back to it's origins again in 2007. Another original Frogger sequel was made a year after the MFTT. Frogger 3D, made in japan the earliest and America a few months after, was made in 2011, thus,so far,concluding the Frogger trilogy. 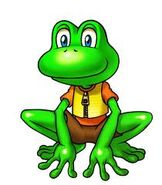 Add a photo to this gallery
Retrieved from "https://hero.fandom.com/wiki/Frogger?oldid=2166190"
Community content is available under CC-BY-SA unless otherwise noted.