Fruit of the Loom Pit Crew

Fixing race cars while the race is in progress

The Fruit of the Loom Pit Crew is a team of heroes from the worldwide American commercial Speedy Boxers that ran from 2013 to 2015. The team provides immediate and necessary assistance to racers during a race at a pit stop. All members of the pit crew wear black helmets, black knee guards, and red fireproof suits ornamented with white. Underneath their suits, each team member is wearing Fruit of the Loom boxer shorts - the source of their ability to help others very quickly. Also, the boxer shorts is the item being promoted in the global commercial campaign.

The commercial begins with two racers arriving at a pit stop. The narrator highlights that both racers only have a half tank of gasoline. The Fruit of the Loom pit crew immediately springs into action to help the racers. Each member of the team is carrying a tool which include a tire, lug nut remover, and fuel pump. The camera focuses on the black and silver race car marked number 63 with a viewpoint on the car's left side. The Fruit of the Loom pit crew works together effectively by each member focusing on a single essential task such as refueling the car, removing the lug nuts on an individual tire, placing a new tire, etc. The camera's viewpoint changes to various shots of the racer car and the pit crew quickly working to fix up the failing race car. As the team is helping the car, the narrator emphasizes that the boxer shorts are helping the pit crew by making sure the crew doesn't have to "re-calibrate their own nuts and bolts in front of 20 million fans." Some of the scenes include an aerial shot, close up of fasteners dropping to the ground, and bolts securing new tire rims. Once the race car has been restored to state-of-the-art functioning condition the team signals the race car driver to resume the race. 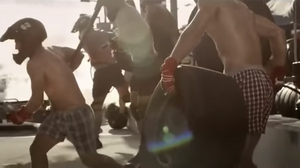 The team springing into action to help racers 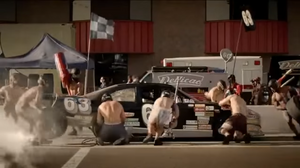 The team working together to fix up racer 63 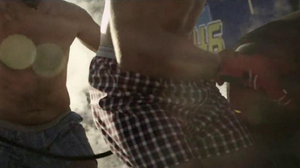 The source of the Fruit of the Loom pit crew's powers 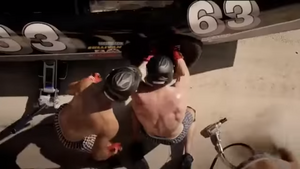 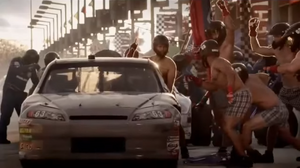 Retrieved from "https://hero.fandom.com/wiki/Fruit_of_the_Loom_Pit_Crew_(Speedy_Boxers)?oldid=1626829"
Community content is available under CC-BY-SA unless otherwise noted.