Extremely hot temper, skilled with fisticuffs and talented rider, can increase his body temperature the angrier he gets

Protect Skylands from Kaos, the Darkness and the Arkeyans

Fryno is a biker rhino in Skylanders: Swap Fore.

He is voiced by Robert Cait who also voiced the Colossus and many others.

Fryno was once a member of the notorious Blazing Biker Brigade and spent most of his youth riding around Skylands with the rest of his crew. But what Fryno did not realize was that, while he enjoyed a life of freedom and adventure, his crew was responsible for acts of burglary throughout Skylands. When Fryno discovered that he had been riding around with a bunch of villains, he burned with rage and demanded that they make amends for the wrong they had done. This resulted in an epic fight, which Fryno won, and the disbanding of the Blazing Biker Brigade. Fryno was in the midst of returning the valuables his crew had stolen when he met Master Eon, who was impressed with his good character and fighting abilities, and offered him a membership to a new crew—the Skylanders. 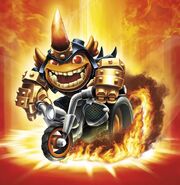 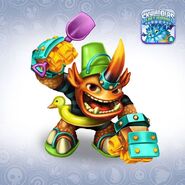 Add a photo to this gallery
Retrieved from "https://hero.fandom.com/wiki/Fryno?oldid=1791720"
Community content is available under CC-BY-SA unless otherwise noted.