Member of the Samurai forces

Return to the mystic realm.

Fu Xi is a character in the Warriors Orochi series, a crossover of the Dynasty Warriors and Samurai Warriors game series. He is often known as one of the Three Sovereigns in Chinese history, or one of the lords who started civilization. His reign was said to have prospered like no other before it. In Chinese mythology, he is known as a half-human, half-serpent deity who is Nuwa's brother and husband. Within various mythological tales, nearly all divine beings kowtow before him and treat him with the highest pinnacle of respect.

Fu Xi first appeared in the world with Nuwa and Taigong Wang tried to stop Orochi. Like other mystics, he is also one of the second leaders of the military. His contribution in the battle was to summon the unconscious doubles of Orochi and Da Ji to attack the Snakes. Finally, the trio was defeated and forced to recuperate.

He appeared in the vicissitudes of the village to help Sakon and Zhang Jiao against Dong Zhuo. Please with Sakon's cunning, he left after the battle. He later seemed to help Sakon's army rescue Kanetsugu in a fire attack. He warned them that it was just an illusion and cut off the source. When Sakon approaches him, Fu Xi will explain that he is testing mortals and will assess the threat posed by Kiyomori.

When he became a member of the Samurai forces, he continued to observe the plan of the strategist. When they succeeded in killing Orochi X, he was the last to see Sakon leave. Protecting the entrance to the mystic realm, Fu Xi blocks any potential intruders and any interference that threatens the mysterious army. When Sun Wukong, who was aligned with Asgardians, tried to attack the gateway to the mystic realm, Fu Xi was finally able to withdraw from the realm field to assist his allies.

After the defeat of Kiyomori and Sun Wukong, Fu Xi was full of details during the absence of Kaguya and Sanzang, and he joined the league to fight Odin. He assisted the Alliance in killing Orochi and bidding farewell to Yinglong. After receiving a letter from Taigong Wang, he came to the boy just because they all realized that this was a move by the Asgard army. In order to deceive and save other mystics, Fu Xi began to pay more and more attention to the power of Loki and Odin. 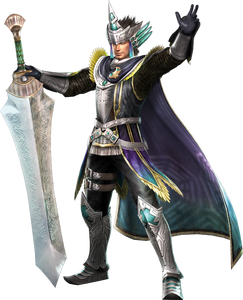 Fu Xi in Warriors Orochi.
Add a photo to this gallery

Retrieved from "https://hero.fandom.com/wiki/Fu_Xi?oldid=1612892"
Community content is available under CC-BY-SA unless otherwise noted.