Professor Zayton Honeycutt, also known as the Fugitoid, is the major supporting character of the 2012 incarnation of Teenage Mutant Ninja Turtles TV series. He is an alien "fugitive" android who aids and travels with the Ninja Turtles in their journey through time and space to stop the Triceratons from destroying Earth.

He is voiced by David Tennant.

Professor Honeycutt is an alien from the planet D'Hoonib, a planet of humanoid scientists (himself included) obsessed with penetrating the highest truths of the universe. Prior to meeting the Turtles, he was working on an energy generator when he was offered a huge sum of money by Kraang Subprime to buy it from him. Honeycutt gave in and the Kraang took the Heart of Darkness, converting it into the doomsday weapon it now was. In the same time the Kraang departed with the generator, Honeycutt began to regret his decision and vowed not to make any weapons to dangerous criminals like the Kraang. While working on a new form of psionic technology, the Triceratons came looking for him and tried to force Honeycutt to build them weapons. When Honeycutt refused, due to his previous guilt for making the weapons for Kraang, the Triceratons attacked him, destroying everything in sight, including his body. To save his life, Honeycutt's robot assistant placed Zayton's brain in its own robot body. A man merged with machine, he was reborn as a cyborg. When the Triceratons found out he was still alive, they deemed him a criminal; A Fugitive Android, thus he was called the Fugitoid. In spite of his hardships, Professor Honeycutt eventually found friendly allies in the Utroms, Bishop in particular, who aid him in his efforts against the Triceratons.

The Fugitoid first appears at the conclusion of season 3 aboard his vessel, the Ulixes, just in time to save the Turtles, April O'Neil, and Casey Jones from a black hole created by the Triceratons. After they escape, he introduces himself and promises them that they are about to embark upon a great adventure.

After the heroes escape, the Fugitoid introduces himself and promises them that they are about to embark upon a great adventure. He revealed that he was a normal scientist until his body was destroyed by the Triceratons for turning down their offer to make weapons for them. His brain survived and was placed in the body of his robotic assistant, and he set out to stop the Triceratons from causing any more harm. He also formed an alliance with the Utrom some time prior to becoming a cyborg, and later approached them with the Turtles in an effort to learn the whereabouts of the black hole generator fragments. The reason for Fugitoid's involvement was later revealed in "Earth's Last Stand": he had created the black hole generator and then sold it to the Kraang, only learning later the ghastly use to which it would be put. Despite the distrust this prompts in the Turtles, April, and Casey, Fugitoid manages to recover the generator and execute his plan: combining his power source and that of his ship to destroy the generator while wiping out the Triceraton fleet in the process. A past version of the Fugitoid then arrives and takes the now duplicate versions of April, Casey, and the Turtles on an adventure; meanwhile, in the wreckage of the Triceraton fleet, present-day Honeycutt's head is shown to be intact and apparently partially functional.

Fugitoid is a slim humanoid robot with pearly white metal. His head is an oval shape and consists of 2 orange lights irises and a small mouth made of 3 LED lights. The sides of his head are small lights that blink on their own in patterns. His head is capable of opening up to reveal a pulsing human brain inside. Fugitoid has slim arms that are capable to extend fairly far.

In spite of his hardships, Professor Honeycutt has a very positive outlook on life and appreciates what he has. Likewise, he is an intelligent, charming, helpful, and friendly being who rarely gets angry about anything. He enjoys establishing friendships and is quite protective of his peers, offering them thoughtful advice on their missions. He is also very lenient and generous to those who he considers his friends, as he allowed the Turtles, April, and Casey to freely take whatever they please from his storage room. Though he has android body, Honeycutt cherishes his humanity and is fearful of the thought of being just a machine, mentally and physically.

A self-proclaimed pacifist, he always seeks to achieve peace and diplomacy with whatever creature that crosses his path, and will only attack when he is left with no other option. His intellect is unmatched, even by Donatello, and he enjoys sharing his vast knowledge of the universe with his friends.

Professor Honeycutt has a superhuman level intellect and often uses it to his advantage. As a super genius inventor, he has created impressive technology such as alien language translators, his own robot body, and his space ship, the Ulixes, which is capable of time travel and tachyonic warping. He also has developed psychic powers through his isolated humanoid brain.

Despite Fugitoid's body not intended for violence (or being intended as his own body), it carries incredibly destructive power that makes him very useful in a fight. His robot body is powered by a fusion core, meaning that he can cause a massive explosion if the core becomes unstable. Honeycutt is capable of using the core to create a nuclear blast strong enough to vaporize creatures even as dense and seemingly indestructible as the Triceratons. Another use for the fusion core is to overload corrupted computer systems and AI such as Overmind. His body can plug into other devices allowing his mind to digitally transfer information and even allows him to hack into things such as massive space stations. Fugitoid's hands are capable of telekinesis, and also have moderate blasters installed to defend himself when needed. 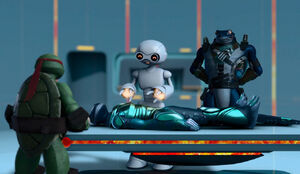 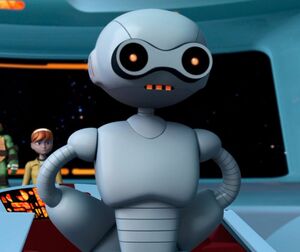