Funeral Parlor or Undertaker is a resistance organization based in Japan and is the main protagoinst faction of Guilty Crown. Funeral Parlor seeks to liberate Japan from the GHQ and its authoritairan rule over the nation.

Funeral Parlor was founded sometime after GHQ took over the Japan. The GHQ had asserted its dominance in the nation and began to strip its sovereignty as Japan had become more and more dependent on aid and protection from the outside world. This had caused GHQ to become more authoritative and corrupt as they set up various divisions to control the Japanese population. This eventually led to the organizaiton's formation and now resists the GHQ's rule over Japan.

During the events of the series, Funeral Parlor is seen attacking the GHQ whenever they see fit. Parlor members were first seen in episode one after a GHQ Battalion was sent to a nearby ghetto to whipoutt the local population after they were declared to be infected. Funeral Parlor interivnes and manage to push back the GHQ Forces from the area. Gai Tsutsugami had confronted one of the GHQ Majors and managed to kill him and saving all of the survivors. Shu Ouma is captured by the GHQ after one of his friends had ratted him out and was rescued by the organization and decides to officially join Funeral Parlor and joins them an episode later.

After Shu joins, he's then forced to go military training but is able to be a confident and reliabel soldier often helping Funeral Parlor on many occasions but is soon tramatizedd after he was forced to kill June, his best friend Yahiro's younger brother, he is unable to fight well and is forced into hiding until he is able to fight again. He eventually regroups with the Funeral Parlor when they began an attack against a GHQ Airplane but were soon ambushed and forced to retreat as the Apocalypse Virus was released and all surviving members had been scattered. After episode 13 the organization's status is unknown but is implied to have been dissolved since all remaining members have officially lost contact with each other and Gai was killed.

The remaining surviving members all regroup towards the end of the series to fight the GHQ and stop Mana Ouma from destroying the world after it's discovered that not only is Gai alive, but he's been revived and has now sided with the enemy both the GHQ and a secret organization called Da'ath. The survivors; Shu, Inori, Ayase, and Tsugumi with a few other remaining members then engage the enemy and manage to stop Gai but at there cost of Inori's life, Shu's health/fragile condition, most of the surviving Funeral Parlor Members, and having to kill both Gai and his sister in order to save the world. By the end of the series, all remaining survivors have scattered and live casual lives officially leaving the organization dissolved by the end with the GHQ defeated and the UN withdrawn from Japan.

Funeral Parlor is a Japanese Nationalist organization as they fight for the soul purpose of a Japan free from tyranny. The GHQ had been murdering innocent civilians and they act as the defenders of the Japanese people as their supposed defenders have betrayed them and left them for dead. They protect the innocent and due whatever it takes to defend Japan and free her from its oppressors.

Being a military resistance organization, Funeral Parlor has standard firearms and resources and are usually outgunned by the GHQ and their endless supply of weapons from the United Nations. Despite this however, Funeral Parlor was able to get and Endlave Mech which gives them and advantage in battle and Shu's Guilty Crown powers also give them an edge as he is able to outmaneuver the enemy. 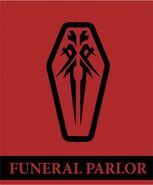 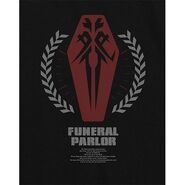 Wallpaper
Add a photo to this gallery
Retrieved from "https://hero.fandom.com/wiki/Funeral_Parlor?oldid=1609729"
Community content is available under CC-BY-SA unless otherwise noted.