Knight
Fuu Hououji is one of the Legendary Magic Knights sent to save Princess Emeraude.

She is voiced by Hiroko Kasahara in Japanese and Bridget Hoffman in English, whom later voiced Irisviel Von Einzbern of Fate/Zero, in video games, she is voiced by Tammy Jones.

Fuu has green eyes, short brownish-blond hair, and glasses. She often wears her school uniform, which has a green jacket, white collar, green skirt and white petticoat and a small red bow and headband. When she arrives in Cephiro, she is given white and gold armor with emaralds on it. At her armors last stage, she wore a green armor dress with the skirt arranged in a pattern like feathers. She wore a gold belt with a emerald on it. The armor on her shoulders was white and arranged like her skirt. Her appearence somewhat may explain her personality.

Fuu is always smiling, but she is actually quite a strategist. She is calm and polite, but blunt: her comments are often right to the point. She is the brains of the team and often saves them from a lot of trouble. Her power lies within her intelligence; she is accurate and logical. Her time spent in the archery club at school allows her to use the bow and arrow well. Her first weapon is a bow and arrow set. She then moves on to a huge sword of Escudo, which becomes too heavy to lift if anyone besides herself tries to pick it up. Her magical element is Wind.

In the OVA, Fuu is still the most intelligent of the three, but is not so much 'polite' than on the series. She plays the piano at the musical club, but she will go to another country with her parents. Taking control of Sky God Windam, she is the opponent of Ferio against Cephiro's invasion of Earth.

One of Fuu's largest strengths is her ability to strategize and to think logically. She starts displaying this ability at the start, by not panicking and thinking about what was going on. She has strong morals, but she's also very curious. When the 3 knights find Presea, she doesn't want to just walk into her home, but once inside, looks around with serious interest. In the Manga, when the 3 knights meet Ferio, Fuu again shines, as she manages to get his help to reach the Escudo without revealing their identities.

Fuu Hououji has snapping green eyes and short blonde hair (brownish-blonde in the anime) and wears glasses, except when in full armour (Fuu is notably the only Magic Knight whose hair and eyes do not share the same color base). She is more quiet and reserved than the other two members of the group and serves as the voice of reason. Along with specializing in archery, she is also highly intelligent and logical, though this is more akin to book-smarts than street-smarts. Fuu often states the obvious and is very blunt in a fairly humorous way, much to Umi's dismay in some situations. Fuu deeply believes that her belief, along with Hikaru's and Umi's, is her strength in saving Cephiro. She often has moments where she doubts herself, but comes out strong and resolved in the end.

Fuu is in love with Ferio, the estranged brother of Princess Emeraude, who has been helping them since they met in the beginning of the first series. In the second arc, she grows closer to Ferio, and though she is torn knowing she helped kill his sister, his feelings for her never waver. In the second season, Fuu wins an archery contest against Lady Aska, after which they become friends. Fuu is very polite and calls people Sir or Miss (-san in the Japanese version). 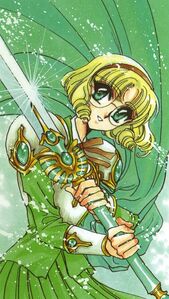 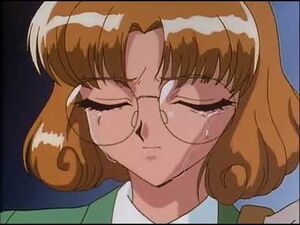 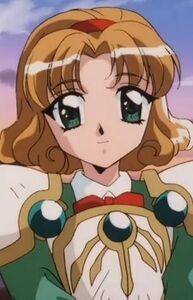 Fuu without glasses
Add a photo to this gallery

Retrieved from "https://hero.fandom.com/wiki/Fuu_Hououji?oldid=2093033"
Community content is available under CC-BY-SA unless otherwise noted.