Get reveange on Mahiru Koizumi for helping cover up the murder of his sister, Natsumi (formerly, failed).

To get out from Killing School Trip (DR2, succeeded).
To stop Ryota Mitarai from brainwashing the world with hope (succeeded).
To atone for his actions as Ultimate Despair (ongoing).

Fuyuhiko bears the title of the Ultimate Yakuza.

In Danganronpa 2, Fuyuhiko lost his right eye after Peko Pekoyama, his hitwoman, accidentally slashed him during her execution in Chapter 2. Fuyuhiko is one of the survivors who managed to escape to the real world and decided to reside in Jabberwock Island.

At the end of Danganronpa 3, the fallen victims of the Killing School Trip awaken and set off with Fuyuhiko and the other survivors to stop Ryota Mitarai from using his hope brainwashing video. Fuyuhiko and his classmates decided to atone for their sins as the former Ultimate Despairs.

Fuyuhiko is a young man in his early twenties, around 22 at youngest. His virtual avatar in the Neo World Program appeared as his 17 year old self.

He is a slim man known for having a refined face, sometimes coming off as a “baby face”. Because of his rather fairly shorter build, Fuyuhiko generally presents an overly aggressive demeanor to assert that he is, in fact, a tough gangster. He has a dusty blond crew cut hair, with a distinct pair of curved lines shaved on each side of his head. He also has freckles along the bridge of his nose and a birthmark near his mouth on the right side. His eyes are gold, and he has permanent blush marks on both cheeks.

Befitting his title, Fuyuhiko dresses in traditional yakuza fashion: well-tailored suits. In the game, he wears a two-piece suit consisting of a dark pinstripe jacket and pants over a white dress shirt. His tie is brown-black with an animal skull emblem on it, and he wears black dress shoes with a platform heel. On his left lapel is a pin that is in the shape of the emblem of the Kuzuryu family, and he wears two silver rings on his right hand. He later wears a black eyepatch with a white, round dragon pattern.

As the Ultimate Despair, he wears a black fedora, suit and a jacket, as well as a long scarf hanging loose and untied on his shoulders. His right eye was implied to have been replaced by Junko's eye, and as such he wears an eyepatch with a golden dragon pattern. During Side: Hope, Fuyuhiko has ditched his eyepatch and a vertical scar is seen where his eye used to be.

Fuyuhiko is initially incredibly stand-offish and rude to the other students on the island. He claims he's not going to play at being friends with anyone, and when he is questioned about this in Chapter 1, he states clearly that he would not hesitate to kill anyone of the others. He makes frequent references to his yakuza background and seems adamant at presenting this sort of "lone wolf" attitude. Fuyuhiko doesn't simply want to make friends but considers it not worth his time and beneath him. Despite this, as early as chapter 1, he shows signs of this perhaps not being all true, with him "happening to walk by" the lodge where the other students were having a party, despite claiming that he had no interest in going.

When Fuyuhiko does interact with the others (by choice or otherwise), his attitude is combative and irritable. He's easily angered, often threatening and/or insulting other people when they disagree with or complain about his actions. He frequently uses the word boke (a particularly pejorative way of calling someone an idiot, often translated as dumbass/shithead/retard.), and will punctuate his statements in an argument with it. He avoids any proper relationships and he's used to being treated with caution by everyone.

After deciding to change in Chapter 3, because of Peko's sacrifice and him realizing his own mistakes, Fuyuhiko became more sociable and avoided bad-mouthing people to the best of his abilities. He even seems to become one of the group's most loyal and steadfast members, though still short-tempered and impulsive. He tries to help others and is shown to openly care about them, even Nagito Komaeda when he was about to die from Despair Disease. Peko's sacrifice is obviously a touchy subject for him.

In his free-time events, Fuyuhiko is revealed to have self-esteem issues concerning his status as the Ultimate Yakuza and the clan's heir. He does not believe he deserves the title, though he grows out of this with Hajime's company. He states that he wants to be strong on his own, and not to simply rely on his family's power to get ahead in life. His goal is to be strong enough to lead his family, rather than to be strong because he leads his family. Because of his insecurities, he is also particularly sensitive about his appearance, as people would expect a big, muscular man to lead a yakuza family, and Fuyuhiko's appearance is the opposite of that. It is suggested that it would not be out of the question for him to react violently if someone were to use the word "baby face" in reference to him. It's also revealed that Fuyuhiko enjoys eating sweets, such as fried dough cookies, which he considers unmanly and shameful and thus tries to keep it a secret. He is also ashamed because he doesn't have any tattoos like "real yakuza" do.

Fuyuhiko takes duty very seriously, and if there's someone who he can trust, he will open his heart and cooperate with them. Despite being a yakuza, deep down he has a somewhat pure heart and he's very strict to the rules. He is the type who takes honor and moral codes seriously. For instance, he is strictly against underage drinking, underage driving and underage sex. In Danganronpa 3, it as revealed that he is one of the few students that attended the class regularly, even though he didn't have to. He also desperately tried to stop Kazuichi Soda from molesting Sonia Nevermind when they were under the effect of aphrodisiacs. 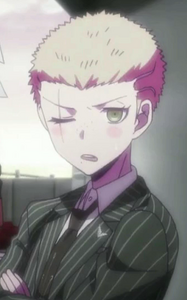 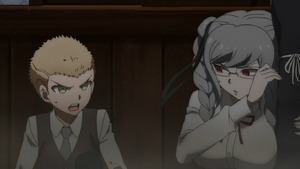 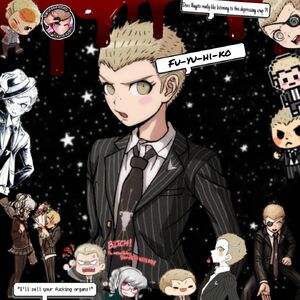