Defeat Sonic and his friends. (formerly)

Redeemed Villain
G-merl, also known as Gemerl, is one of the main antagonists in Sonic Advance 3. He is a Gizoid created by Dr. Eggman from Emerl's data, making him a revised version of his predecessor. G-merl once aided the doctor in his attempts to stop Sonic the Hedgehog and his friends from foiling one of his plans, but wound up betraying Eggman to cause mayhem. After his defeat, he was reprogrammed in the image of his predecessor.

An ancient robot called a Gizoid that can learn to copy the traits and skills of others; G-merl is a unique model that can also absorb Chaos energies. Dr. Eggman created him using data from Emerl, a Gizoid stated to have wiped out the civilization that made him. Emerl picked up better traits by hanging out with Sonic and his friends — but had to be destroyed once his old programming kicked in.

G-merl assisted Dr. Eggman in his attempt to conquer the world after he used Chaos Control to fragment it into segments. The Gizoid would repeatedly confront Sonic and his friends in battle either by himself or inside one of the machines piloted by his creator. However, despite being designed as the ultimate fighting robot, G-merl was unable to defeat his adversaries and eventually turned on Eggman at the Emerald Altar, where he used the seven Chaos Emeralds to assume the form of Ultimate Gemerl.

It took the combined efforts of Super Sonic and Dr. Eggman to stop the Gizoid before he could escape and reverted to his previous form before Cream the Rabbit found his batted body on the beach. Tails was able to repair the damage done to G-merl and reprogrammed him with a much friendlier personality similar to his predecessor. G-merl befriends Cream soon afterwards and is last seen living with her and Vanilla.

G-merl is a humanoid, mostly black, robot. He possesses five-fingered gray hands and feet in the shape of shoes with black soles and yellow lines around them. His upper arms, abdomen and thighs are gray, and he has spherical black joints as shoulders and pelvis-leg joints.

G-merl lacked any emotions besides following Dr. Eggman's orders to battle Sonic and friends. However G-Merl turned out to have a will of his own once he saw all 7 chaos emeralds and promptly betrays his creator.

After his defeat and being reprogrammed by Tails, G-merl displayed a kind-hearted nature and is now living with Cream the Rabbit at her mother's house (becoming more akin to his predecessor). There is a small scene after end credits in the true ending, where G-Merl is seen consoling Cream after the young rabbit trips and cries, helping her up. 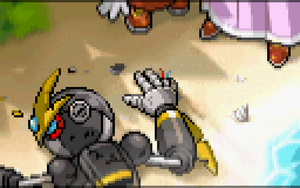 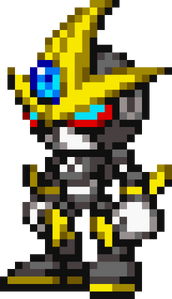 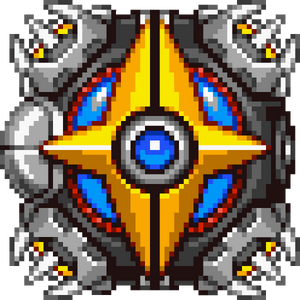