To prevent crime and corruption especially from Dr. Claw (all succeeded)

Gadget Model 2, better known as G2 for short, is the deuteragonist of Inspector Gadget 2. She is Inspector Gadget's upgraded female counterpart whose gadgets and investigation procedures, unlike Gadget's, work flawlessly in contrast to the original as his usually malfunction.

She was portrayed by Elaine Hendrix.

G2 was created by Gadget's creator, Baxter to replace Inspector Gadget until his glitches had been fixed. Unlike the Inspector, G2 need not say "Go Go Gadget!" to activate her arsenel. Though not programmed for such emotions, she found Gadget strangely likeable. Working alone "together", G2 was foiled by Gadget several times in preventing Dr. Claw from forwarding his plans. When Gadget was fired for causing chaos at the sceince fair (even though he had enough evidence from scientists to prove that it wasn't his fault), G2 seemed sympathic towards his plight. By the time Claw stole the ruby, G2 herself proved unable to stop him because of a giant magnet. Her failure led to deactivation by the Mayor after the Mayor tells Quimby that the Gadget program is shut down for good, but Gadget reactivated her because he had developed a crush. After Gadget discovers the bowling shoe that one of Claw's men dropped at the Science Convention and Claw's evil plan as well as discovering his tragic mistake of not listening to her earlier, she then helped him track down Penny after Claw froze Riverton in time after Gadget asks G2 to help him save his niece. Seeing Gadget needed use of his gadgets without worrying about glitches, G2 replaced his malfunctioning chip with one of hers, taking it to replace the one she gave him. Capturing Claw's men, G2 now needed Gadget's activation phrase; the glitches proved beneficial.

When they reversed the damage Claw caused using the password "Crime Always Pays", G2 was thanked along with Gadget and Penny as she and Gadget are declared heroes by Chief Quimby and the Mayor and Quimby decided to have Gadget and G2 on the case together. Having grown to like the inspector, G2 shared a kiss with him.

When the final battle ends, Chief Quimby and Mayor Wilson award the team for their heroism and Quimby decides to continue the Gadget Program to form an army of Gadget Models to improve strength of capturing Claw should he return. Quimby is also ordered to have Gadget and G2 on the case together for their heroism and their hats malfunction with beeping hearts, which makes them kiss and Gadget shoot fireworks out of his hat. However, as one of the fireworks explodes near Chief Quimby and the mayor, they both yell out Gadget's name in anger, implying he is now in trouble again.

G2 probably has all of Gadget's gadgets, along with some special abilities (like detaching body parts). She also has a boomerang gun, net launchers, and wrapping paper on a flying object.

At first, she is a robot incapable of emotions, but later, she gains a more human one. She is also kind, determined, brave, and faithful.

G2 has reddish-brown hair in a ponytail and she has blue eyes. She wears a blue policewoman hat with a uniform and blue boots, which is part of her body as well. 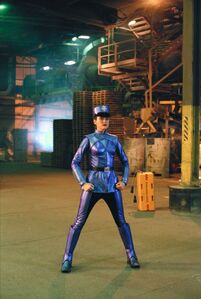 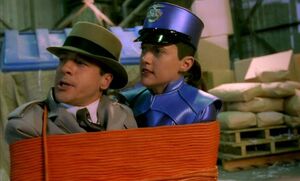 G2 and Gadget tied up 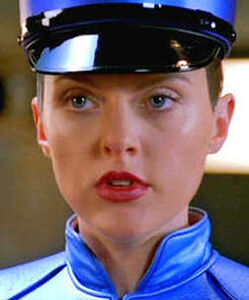 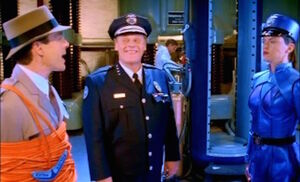 Gadget with The Chief and G2 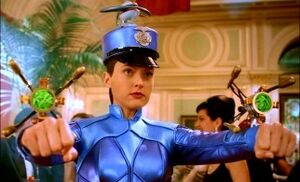 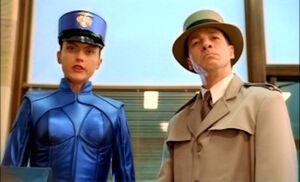 G2 and Gadget in The Chief's Office 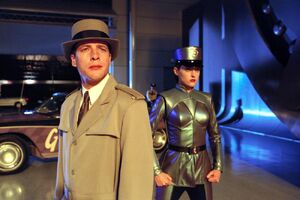 Gadget and G2 in The Riverton Bank 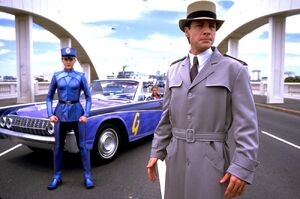 G2 and Gadget facing Claw on the bridge 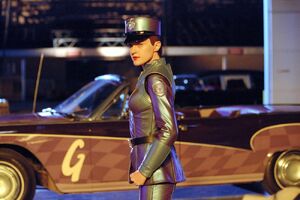 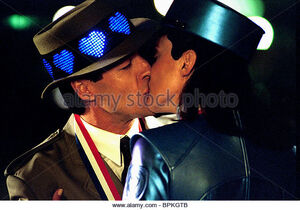 Gadget & G2's kiss
Add a photo to this gallery

Retrieved from "https://hero.fandom.com/wiki/G2?oldid=1864660"
Community content is available under CC-BY-SA unless otherwise noted.