He was created from scrap parts and pocket junk and given to Zim by the Almighty Tallest to save on a regular SIR (Standard-issue Information Retrieval unit). The G in his name is an unknown word or it doesn't stand for anything.

He is voiced by Rosearik "Rikki" Simons.

The only differences between GIR and regular SIR units are the unique coloration of the luminous parts of GIR's body (teal instead of red), a different configuration for the eyes, and his cross-hatched mouth. The similarities in construction suggest that the components from which he was built came from an out-of-date model of the SIR unit.

GIR's usual Earth disguise consists of a green dog suit with a zipper on the stomach and a head that can be pulled over like a hood. It also includes a small tail that he is inexplicably capable of wagging like a human dog's. The large eyes sometimes blink while at other times they don't. Also, the mouth will sometimes open when he speaks, whereas other times it stays closed.

He also has a small child disguise with blonde hair and the mouth hanging open so he can see, but it was only used in two episodes.

GIR is mainly unstable, reckless, wild, loud, absent-minded, disobedient, enthusiastic, outgoing, goofy, talkative, friendly, happy-go-lucky, energetic, and very hyperactive. GIR eats anything, likes to socialize with humans, and loves to watch lots of cartoon TV shows, especially The Scary Monkey Show. He often runs around and makes vocalizations. He loves to have fun. GIR is loving and friendly towards everyone.

He can be smart in rare instances such as in "Bad, Bad Rubber Piggy" where he questioned the idea of sending a machine into the past to destroy Dib. His intelligent thoughts were too much for his system to handle and his head exploded.

There is another side of his personality that isn't shown as much. He can 'flip out' dramatically, usually, when he is controlled by Zim and switched to Duty Mode, causing him to act extremely serious, obedient, aggressive, and demanding, such as in the episode GIR Goes Crazy and Stuff. He is quite intelligent when in Duty Mode and his speech patterns aren't nonsensical.

He also comes up with bizarre ideas which he shares with Zim when in normal mode. 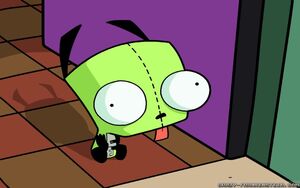 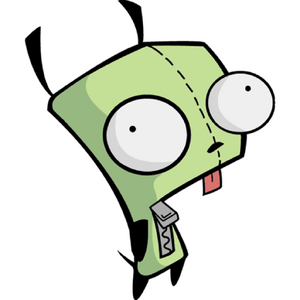 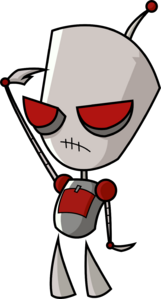 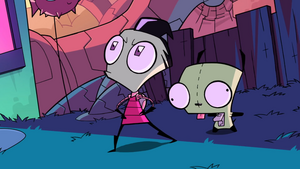 Retrieved from "https://hero.fandom.com/wiki/GIR?oldid=2261871"
Community content is available under CC-BY-SA unless otherwise noted.