GWAR are a gang of extraterrestrial marauders who betrayed their cosmic Master.

At the beginning of all things, there was the Master, a hideous planet-sized creature floating in an endless void. And it was a boring void, so he created everything ever just to amuse himself. And as life spread through this void, The Master found the best way to amuse himself with his new toys was to make them fight each other, so he created WAR. And he saw that it was good, so he created The Scumdogs of the Universe as the ultimate executors of his favorite activity.

For thousands of eons the Scumdogs heaped endless atrocities upon a deserving galaxy. Planet after planet, race after race blazed to ruin on their flaming altar of sacrifice. Their enemies were many, from the peaceful folk of Flab-Quarv VII, to the sinister legions of robotic holy-warrior Cardinal Sin, and the wars they waged were never-ending. Led by The Master’s most loyal servant, the cyborg Techno-Destructo, the Scumdogs had become the most powerful force in the universe. So great that they dared to rise up in rebellion against their creator and fulfill their dream of destroying everything. The ensuing battle was beyond epic, as The Master deployed his newest and most powerful weapon, The Death Pod, and turned it against GWAR. Ultimately defeated, the Scumdogs were loaded into the dreaded Butt-Cannon and shot to the most insignificant, isolated mud ball of a planet in the entire galaxy—the planet Earth!

There they busily set about fucking everything up on their new home. The first thing the alien refugees did was have sex with the local animal population, thereby creating the human race. These loathsome creatures spread across the surface of the planet faster than the herpes on Lohan’s twat! The Scumdogs delighted in the destruction of the human’s civilizations—like the time Beefcake sank Atlantis by using it as his personal vomitorium, or Flattus defoliated the Fertile Crescent with his chronic flatulence! But soon all of this barbarous activity had attracted the attention of The Master, who sent Techno-Destructo to check on his wayward creation. Enraged that GWAR had created humans (the most annoying of races), The Master froze them in a great tomb in the barren waste of Antarctica, to sleep in its icy vastness until such times as he might need their awesome power and call them back into his horrific service!

Millions of years passed, but GWAR still imposed their will on humanity…reaching into their dreams and inspiring them to heap atrocities upon each other and pollute and ravage their own world with disease and war. And it was the pollution of heavy metal that ultimately led to GWAR’s release! Because of the brief dominance of hair-metal bands in the late 80’s, and their overuse of hair spray, a huge hole was burned into the ozone above the GWAR temple, and the Scumdogs began to thaw. At that precise moment, music mogul and notorious underworld boss Sleazy P. Martini was on the run from the I.R.S., shot down over Antarctica and crashing into the frozen tundra in front of the GWAR Temple! Stumbling inside, he discovered the ageless warriors stirring within their tombs. Seizing the moment and in short order Sleazy quickly got them addicted to crack (the only thing that saved his life), brought them back to the U.S.A., gave them electric guitars, and exposed the world to the sickest band in metal history—GWAR !

Since GWAR’s re-birth on planet Earth, events have come at a tumultuous pace. GWAR has witnessed, inspired, and is indeed directly responsible for many of the most destructive events in Earth’s recent past. It is no coincidence that since the second coming of GWAR, this world has slipped ever closer to the apocalypse it so woefully deserves. Indeed, if GWAR hadn’t had to expend so much energy battling their cosmic foes, they would have surely eaten the entire human race by now! GWAR has withstood the onslaughts of Techno-Destructo, and his brother, Bozo-Destructo, after they were done fighting each other! GWAR braved the wrath of Granbo and the Morality Squad, who attempted to confiscate Oderus’s penis. GWAR fought the hideous SkulHedFace in an attempt to summon the World-Maggot and ride it back to outer space. Unfortunately it left them behind, to hope in vain that maybe there are two World Maggots! GWAR even repelled an assault by the Master himself who attempted to return them to his cosmic servitude.

Most recently GWAR was dealt a series of catastrophic blows when first Flattus Maximus returned to the stars, transforming himself into a supernova, and then the ignominious Oderus Urungus was snatched away to the very End of Time where his immortality was stolen from him. Oderus was slain by a villain of his own creation, the vainglorious Mr Perfect, leaving his fellow Scumdogs leaderless and alone. In their darkest hour, hope arrived in the form of two new Scumdogs, the guitar wielding Pustulus Maximus and the berserk war priest, Blothar.

And so GWAR continues to ravage the planet, conducting their great “death-rallies”, luring the human hordes in with the music of metal, and then slaughtering them en masse. CD’s, DVD’s, and burnt-out cities continue to be produced in infinite procession, tracking the continuing progression of one of the most legendary bands in rock and roll history—the mighty GWAR!

They are also villains, however. 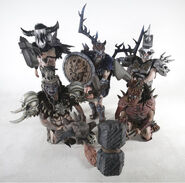 Add a photo to this gallery
Retrieved from "https://hero.fandom.com/wiki/GWAR?oldid=1717027"
Community content is available under CC-BY-SA unless otherwise noted.