To assert his existence (prior to redemption)
Became Kazekage (Succeeded)
To protect Sunagakure and Ninja world from oncoming evil threats.

Gaara is tthe former antagonist-turned-one of the main supporting characters in the Naruto anime/manga series and the Boruto: Naruto Next Generations anime/manga series. He is currently the Kazekage of Sunagakure (Hidden Sand Village) in Naruto Shippuden. He was formerly a villain in the early part of Naruto, being a threat in the Chunnin Exams. He was an misanthrope due to discrimination and isolation he experienced in childhood because the Shukaku, or the One Tailed Demon sealed inside of him. His hatred was extinguished by Naruto Uzumaki upon his defeat. As the current Kazekage, he administrate and protects his village. Gaara is also the youngest to be ever to become Kazekage. He occasionally assists Naruto or the Hidden Leaf in general. He can control sand and his ninja techniques are mainly sand based. He was captured by the Akatsuki and extracted Shukaku by using the Gedo Statue as result of his death until he was revived by Chiyo with the reincarnation ninjutsu in exchange for her to die. While forming the Allied Shinobi Forces, Gaara became commander of the Fourth Division as well as the commander-in-chief of the forces. After the Fourth Shinobi War, he remained as the Kazekage and adopted Shinki as a son to control his Iron Sand that was created by the Third Kazekage.

Gaara is an extremely powerful shinobi, becoming Kazekage by the time he was 15, and later during the Fourth Shinobi World War, he was appointed the Regimental Commander, and leader of the Allied Shinobi Forces's Fourth Division. His power and status have now become well-respected and praised by everyone in the Allied Shinobi Forces, including other Kage, both the current and previous ones. Even the Second Mizukage called Gaara the "golden egg amongst the Kage", and his father acknowledged that he had surpassed him in more ways than he could have hoped for. He was also praised by his enemies such as Deidara, who commented on his power after he captured him, losing an arm to Gaara's attack in the process. Even though he had lost his tailed beast Shukaku, he was still powerful enough to remain Kazekage. Another testament to Gaara's power at his young age is that he could hold his own against five of Madara Uchiha's Susanoo-clad wood clones for a long period of time.

Born as the former jinchūriki, Gaara gained Shukaku's immense reserves of chakra and stamina. In addition, his chakra was noted to be very strong as noted by Kiba and thus is able to use many chakra-taxing sand-based techniques, sometimes in quick succession, before becoming exhausted. Despite the removal of Shukaku from inside him, Gaara's chakra reserves and strength remained just as powerful.

As a host of Shukaku, Gaara possesses the ability to freely manipulate sand, through the beast's Magnet Release, to serve various purposes. The focus of his fighting style, Gaara's control and cunning in using this ability is formidable, able to control immense amounts one time for feats such as fully transforming into Shukaku and create a tsunami of sand to fight four reincarnated Kage. During battle, Gaara rarely moves, attacking with his sand from a single location, and rarely uses taijutsu. His most basic attack method is to first capture and immobolise his target, and then implode the sand to crush the target. Taking advantage of the malleable nature of sand, Gaara has come up with various "catch and crush" tactics. As the second element of his combat style, Gaara has various sand-defences should opponents gets too close. His primary defence is his Shield of Sand, forms a barrier to surround and protect Gaara on its own. While automatic, Gaara can control its strength-level to steel-like quality or make it completely encase himself. While an effective defence, the shield can be overcome with high-speed attacks or simple enough sheer force. Should this happen, Gaara has a secondary layer of sand covering him called the Armour of Sand. Although useful, the armour requires large amounts of chakra to remain active, and also has the side-effect of weighing Gaara down. The defences offered by his sand are so powerful, they have been named the "Absolute Defence" (絶対防御, Zettai Bōgyo). It is unknown whether or not Gaara's automatic sand defence was ever truly Shukaku's doing as according to the Fourth Kazekage and Yashamaru, Gaara's mother, Karura, was the true source she loved him and vowed to always protect him.

In addition to these basic methods of offence and defence, Gaara also has a number of miscellaneous techniques. By making a sand clone of himself, Gaara can have an ally to be used in battle. Unlike most clone techniques in the series, the sand clone can retain its shape after being hit, able to reform itself or capture an opponent upon being dispersed. With his Desert Suspension, Gaara can use sand as a platform, to allow himself and others to float in the air. He can also ride his sand faster than Ōnoki can fly to a location. Using the Third Eye technique allows him to create a floating eyeball of sand in any location, which he can see through as a means of spying or guide his attacks while his sight is obstructed. His sand can also be used as a sensing device: Gaara can detect when others come into contact with it, even from far away. The sensing of his sand is so great, it was able to repeatedly find the disappearing Mū and the Second Mizukage's Giant Clam.

In Part II, Gaara's prowess can gather enough sand to shield the entire village of Sunagakure from Deidara's C3, as well as assist in stopping a giant meteorite. If sand is lacking in abundance, Gaara can break down the earth minerals in the ground to create more sand. He is able to manipulate the sand even when it's saturated with water. While he can control normal sand, it requires more chakra to manipulate, tiring him at a rapid rate. As a result, Gaara keeps his own chakra-infused sand with him at all times, in a calabash gourd also made out of sand on his back, which also gives Gaara a greater attack-rate. Furthermore, Gaara can crush the hardest minerals in the ground together to create a shield in shape of Shukaku's body or, in the anime, a spear in the shape of its arm for combat. He was able to integrate gold dust, a feat previously only usable by his father, into his sand.

Despite the removal of Shukaku, Gaara can still use his sand like before. According to Sasuke at the Kage Summit, Gaara's Absolute Defence is still alive and well, as well as its previous speed and sheer attack power as it protected Gaara and others from a cave-in, block the attacks of A and Amaterasu (without being burned from the latter). During the Fourth Shinobi World War, Naruto expressed belief that Gaara retained the best defence of anyone, later able to block a barrage of strikes from Madara Uchiha's complete Susanoo's sword. Gaara's sand powers were so strong that his father believed he had fully transformed into Shukaku and was later surprised to see that was not the case. Gaara was able to quickly manoeuvre his sand above his father's Gold Dust, despite its superior weight and stop an enormous meteorite. Gaara's sand is also seemingly the only ninjutsu-based substance that cannot be absorbed. He can even block powerful explosions the instant they explode despite their enormous power, protecting his village and the division respectively.

He has also shown the ability to use Wind Release nature transformation, though this was only seen while he transformed into Shukaku. Gaara has also displayed some collaboration techniques with Shukaku. After using Shukaku's Wind Release, Gaara can also insert his sand into an opponent's body, and use it to control and restrict their movement. Pooling their powers, Gaara and Shukaku can use a juinjutsu empowered seal, which required a senjutsu-bearing Madara Uchiha to use complete Susanoo in order to escape.

In desperate situations, Gaara was able to take on the form of Shukaku by layering sand on his body, making him many times more powerful than he already is. Shukaku's personality grew more dominant during this transformation, increasing Gaara's homicidal tendencies. Once finished, Gaara assumed a human-sized version of Shukaku, wherein he relied on his brute strength to destroy everything around him.

If need be, Gaara could almost instantly create a life-sized version of Shukaku, should the human-sized form fail. In this form, he remained deep within the copy of Shukaku, safe from harm, though unable to move. When in need of Shukaku's full power, Gaara would use his Feigning Sleep Technique, which forced him to sleep, and allowed Shukaku to take full control. To do so, however, Gaara must emerge from within the copy, leaving him open to attack for the duration of the technique.

Over time, he began gaining better control over Shukaku, such that he could suppress its personality by himself towards the end of the anime's pre-Shippūden filler arcs. By the time Part II began, Gaara was even capable of using Shukaku's arms to attack numerous times, without losing control of himself. However, this could have merely been his improved control over sand in action.

Though he almost never uses taijutsu as a fighting element, Gaara has displayed incredible reaction speed against regular users of taijutsu as he was able to instantly react at a moments notice to Rock Lee closing his eyes and completely escape from his high-level taijutsu attacks while having enough precision to position himself directly behind Lee. He has also shown considerable stealth skill and proficiency in the Body Flicker Technique, able to sneak up on Sasuke during their first encounter without the Uchiha noticing. Gaara has also shown some measure of physical strength, even without transforming into Shukaku as he was able to easily repel Temari with a single punch, despite being wounded.

He has also shown to be a skilled teacher in the anime, teaching Matsuri how to use the jōhyō when he learned she was afraid of weapons. In Part II, Gaara has also shown to be a highly analytical and very skilled tactician. This is proven when he was able to defeat the Second Mizukage by formulating a way to counter the Mizukage's exploding clone. Like many Suna shinobi, Gaara is skilled with the Sealing Tag, using his sand in place of cloth.

Gaara in the first part of Naruto 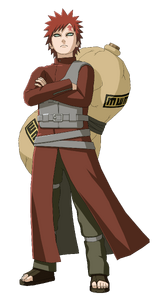 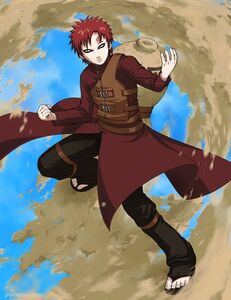 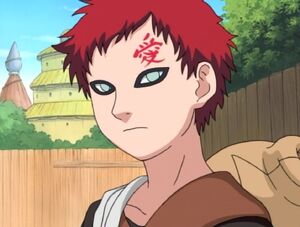 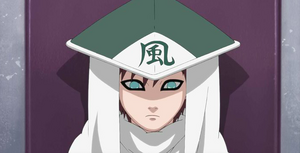 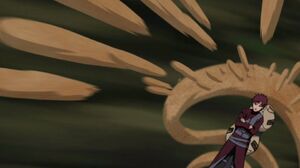 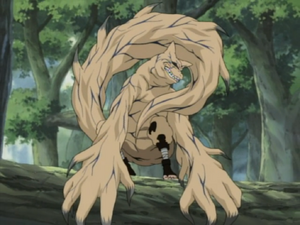 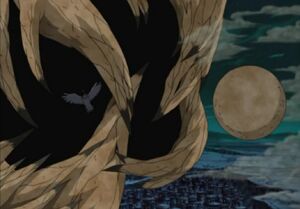 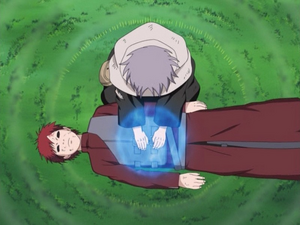 Chiyo giving Gaara her life energy to bring him back. 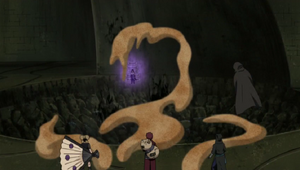 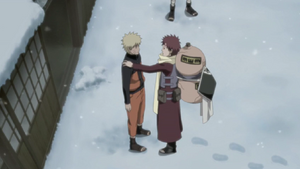 Gaara talks to Naruto about what to do with Sasuke. 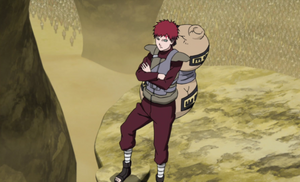 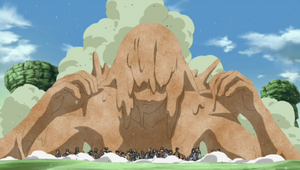 Gaara protects the Fourth Division from an explosion. 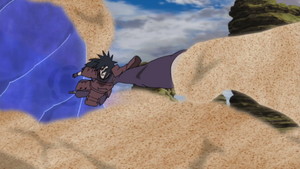 Gaara pulls Madara out of his Susanoo. 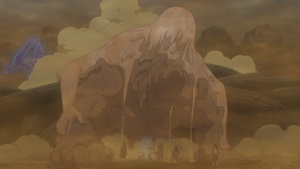 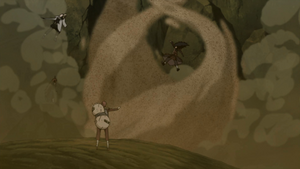 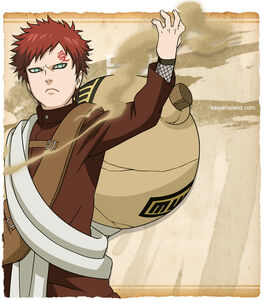 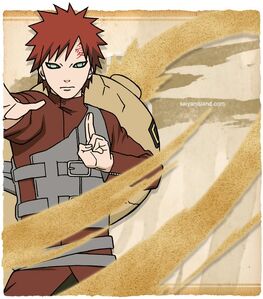 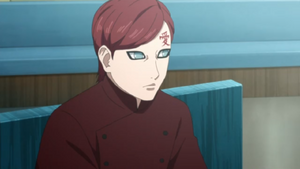 Gaara from Boruto: Naruto Next Generations 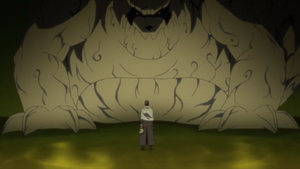 Retrieved from "https://hero.fandom.com/wiki/Gaara?oldid=1722235"
Community content is available under CC-BY-SA unless otherwise noted.