The brat who killed Sasha (by Eren)

Chatting with her fellow warrior candidates.

Become the inheritor of the Armored Titan (abandoned).

Kid
Misguided
Determinator
Gabi Braun is an anti-heroine in the 2009 Japanese dark fantasy manga series Attack on Titan and the final season of its 2013 anime television series adaptation of the same name.

She was an Eldian girl born and raised in Marley as a soldier who bore nothing but disgust towards the "devils" on Paradis Island. Despite her young age Gabi distinguished herself and eventually became one of the few candidates to inherit her older cousin Reiner's Armored Titan power.

She is voiced by Ayane Sakura in Japanese and by Lindsay Seidel in English.

Gabi is a small young girl of twelve, with a petite yet athletic build. She has a small face with wide brown eyes and defined eyebrows, a small upturned nose and a notably radiant smile. She has medium length dark hair which she keeps half tied above her head with large strands on each side of her face. Like her fellow Warrior candidates, she wears the standard Marleyan soldier uniform consisting of a white jacket and pants, supply packs on the hip, suspender straps, a hard hat with a stripe around it, and knee-high black combat boots.

Gabi is brave, loud, impulsive, and prideful. She is very passionate about her goals and head-strong, expressing her emotions and opinions without inhibition. Not even under violence and submission she holds back, and keeps cursing and struggling when restrained. She possess boundless determination, and willing to put her life on the line to complete a goal for a perceived greater good. She also cares deeply for her fellow Eldians living in the Internment Zones, while holding and intense hatred for the Eldians living in Paradis Island, whom she sees as "devils" and different from the rest of the Eldians in the world.

Gabi can also be very cocky and stubborn, as well as overbearing and domineering. This causes her to be tactless at times, forcing her opinions on others and taking charge regardless of whether it was asked for or not. Sometimes she may even get violent, if another person is proving her wrong. She also considers herself the de facto leader of the Warrior candidates to an extent, and even threatening to 'punish' them when they disagree with her. Nonetheless, she is friendly enough that they have no issue with spending their leisure time with her.

Gabi is care-free even on the battlefield, making remarks about her cuteness and claiming her commander loves her too much to sacrifice her. She thinks herself more worthy than 800 soldiers put together, and even believes she might become the best Marleyan Warrior who ever lived. She holds a strong sense of pride in being a 'true' Eldian and does not remove her armband under any circumstances; if forcibly removed, she will do anything to get it back and fears that without it, she will become just like the evil Eldians on Paradis.

When it comes to warfare and fighting, Gabi is quite smart, having the intelligence to craft a bomb capable of derailing an armored train meant for taking out the strongest Titans while huddling in a ditch with limited supplies, and forming a plan to get close enough to perform said action. However, she is entirely oblivious and obtuse regarding other matters. Even though the other candidates are aware of Falco's obvious crush on her, Gabi remains unaware despite several people commenting on it while in her presence; even when Falco practically yelled it to her, she failed to figure it out. However, when Falco properly explained it to her, she was taken aback by it and could only blush at the news. 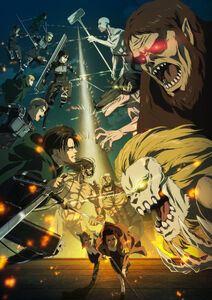 Gabi and Falco on the third key visual for the fourth season of the anime. 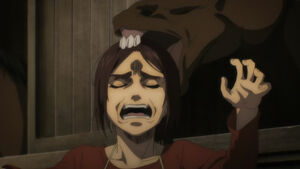 House eats Gabi.
Add a photo to this gallery

Retrieved from "https://hero.fandom.com/wiki/Gabi_Braun?oldid=2274402"
Community content is available under CC-BY-SA unless otherwise noted.