Member of the Akuma Clan (formerly)

Denball and Chain
Transforming into a bird

Brute
Gabra is a member of the Akumaizer 3 and one of the main protagonists of Akumaizer 3.

He later begins using his transformation ability to change into an ostrich called Gabra-Cho.

Born a water demon of the Akuma Clan, Gabra spent his whole childhood growing up inside Downworld with his childhood friend Yuki-onna, whom he called "Yuki-chan".

Evil and Gabra were sent by Mezalord to bring Xavitan to face tribunal for his treason against the Akuma Clan. Xavitan fought Gabra and defeated him, but spared his life and allowed him to recuperate by drinking water.

When Xavitan allowed Evil to capture him in order to bring him to the Downworld where the Akuma Clan resided so he could rescue all the humans the Akuma Clan had captured, Gabra joined up with Xavitan along with Evil, who was also thankful to Xavitan for sparing his life.

Together, the three fought off the Akuma Clan and rescued all the humans before returning to the surface world. 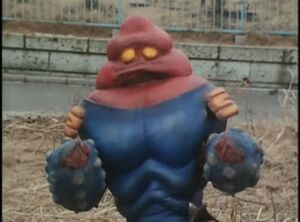