Gear:Various weapons and other gear, including...

Gabriel Van Helsing is a monster hunter and the main protagonist of the 2004 horror film Van Helsing. Suffering from Amnesia, he works for the Knights of the Holy Order, a secret society dedicated to protecting the Earth from all evil. He is believed to be immortal as he has several dreams of ancient battles long ago. He fights the infamous, Count Dracula, and must become that which he fights in order to vanquish Dracula. He is assisted by Carl, a monk and weapons specialist, and Anna Valerious, his love-interest.

In the film, he is hunted and labeled a murderer by society. In 1888, he hunts Mr. Hyde in Paris and kills him but when he died, he turned back into Dr. Jekyll and the police accused Van Helsing of murder. When he returned to the order in the Vatican, he is given another task. He gets sent to Transylvania to kill Dracula, but he must also protect a brother and sister hunted by Dracula. If the siblings die before Dracula, their souls won't be allowed into Heaven. This Dracula is different than others: garlic, holy water, stakes and crucifixes have no effect on him.

Van Helsing arrives in Transylvania and is attacked by Dracula's three brides in broad daylight. Van Helsing kills one of them and is taken in by the sister, Anna. Her brother Velken was killed by a werewolf and he becomes the next werewolf. Anna and Van Helsing break into Frankenstein's castle and Van Helsing meets Dracula. Dracula knows all about him and has information about his life before he lost his memory. Van Helsing escapes with Anna and take refuge in an abandoned windmill, where they fall through a hole.

The next morning, they encounter the Frankenstein's monster who tells Van Helsing that he is the key to Dr. Frankenstein's machine that brought him to life. Dracula needs the creature to bring his thousands of children to life. Van Helsing decides to bring the creature to Rome, where he would be safe. Anna offers him transportation and they set out. They are intercepted by the two brides but Van Helsing was driving a decoy carriage full of silver stakes and he blows up the carriage and the stakes kill the second bride. Van Helsing runs into Anna and the others and are attacked by the werewolf. The werewolf sets the carriage on fire and strikes Van Helsing and he shoots the monster.

Anna finds her brother dead the next morning and attacks Van Helsing. He tells her it had to be done and she discovers that he has bitten and will soon become one as well. She is captured by the last bride and brought to Budapest. The bride meets with Van Helsing and offers an exchange: the creature for Anna. He refuses and decides to rescue Anna by breaking into Dracula's summer palace where he is hosting a Halloween masquerade ball. He hides Frankenstein in a crypt but he gets captured and brought to the laboratory. Dracula's guests are all vampires and he unleashes them to the three friends. They escape thanks to Carl's inventions which kills all the vampires, save for Dracula and his bride. Van Helsing learns that the order wants Frankenstein dead and he starts going through the change. They return to Frankenstein's castle and find everyone and everything gone. They brought all the equipment to Dracula's hidden lair.

They find a portal leading to the lair and engage in battle. They find Frankenstein imprisoned and failed to free him. He tells them that Dracula has a cure to remove the curse of the Werewolf, which they finally discover that only a werewolf can kill Dracula. Van Helsing frees Frankenstein but Dracula notices him and throws him down several stories. Frankenstein helps Carl kill Igor and then helps Anna fight the last bride. Van Helsing survives the fall and battles Dracula in his werewolf form. Dracula tries to possess him but Van Helsing's will was too strong to overcome and Dracula turns into his monstrous from and the two battle it out. Van Helsing gains the upper hand and wounds Dracula deeply. Dracula tries to negotiate and ask for a partnership but the werewolf would not listen. He grabs Dracula by the throat and attempts to strangle him but turns back into human form. Dracula finally tells him that Van Helsing killed him back in 1462 and that he is the angel Gabriel, the Left Hand of God. Dracula offers him to give him back the life he had as well as his memory but he refuses. He becomes a werewolf once again and bites Dracula in the neck. Dracula dies and so does all his children.

Anna tried to inject the cure but the werewolf sees her and attacks her. Carl sees him and must kill him himself with a silver stake. Carl began to strike but the werewolf grabs him and in that time, Anna injects the cure but it cost her her life. Van Helsing returns to normal and weeps over her body. A few days later, he builds a pyre for her and burns her. Her soul appears before him and thanks him as she is reunited with her family and their souls could now go to Heaven. Van Helsing had accomplished his mission and he and Carl journey back to Rome.

Van Helsing is a lonely and silent man, always expecting something to happen, as prey expects an ambush. He has fought many battles (though he lost his memories so he doesn't remember) and hunted countless monsters for years. Even though he hunts without question, he is always asking the church for forgiveness, as he sees them becoming who they used to be. Besides, no matter how many monsters he kills, he is seen as a murderer to the eyes of the people (mainly because the general public doesn't know that monsters exist). He often works alone, but can be a good partner or a powerful ally. Despite his slight contempt for the church, Gabriel is a devout man who does God's work. 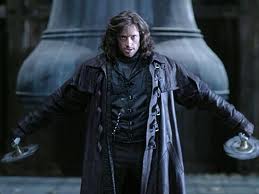 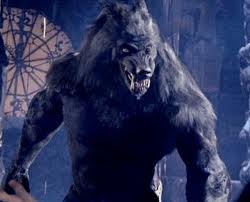 Van Helsing as a werewolf