Expertise in mechanics and engineering

Fat Cat and his thugs

Virtually Resourceful Genius
Gadget Hackwrench is the deuteragonist of Chip 'n Dale Rescue Rangers and a supporting character of the 2022 live-action/computer-animated movie of the same name.

She is the child prodigy daughter of a famous mouse inventor, scientist, and pilot named Geegaw Hackwrench. She has the uncanny ability to take a few oddball objects and invent nearly anything with them. Like most wacky inventor-types, and she can be extremely focused and, therefore, usually oblivious of what is happening around her while inventing.

She first met Chip 'n Dale on their first case as "Rescue Rangers" and helped them solve the crime by lending her inventive talents to the case. Having nowhere else to go and no other obligations, she joined Monterey Jack (a friend of her father's) and became an official member of the Rescue Rangers. She now lives with Chip, Dale, Monty, and Zipper the Fly in a hollow tree limb in a city park.

Both Chip and Dale are very attracted to Gadget and can be found often vying for her attention (similar to their infatuation and rivalry over Clarice from Two Chips and a Miss), or vice versa, depending on if another female shows up. By the end of the series, however, she chooses Chip and enters a relationship with him.

She is voiced by Tress MacNeille, who also voiced Babs Bunny on Tiny Toon Adventures, Dot Warner on Animaniacs, Charlotte Pickles on Rugrats, Dil in The Land Before Time IV: Journey through the Mists, and Mom on Futurama. Tress reprises her role as Gadget in Chip 'n Dale: Rescue Rangers 2022.

She has a pink nose and light blue eyes, while the color of her hair has frequently been a topic of discussion as it changes from episode to episode. In many episodes, her hair appears to be orange in color and in others, it shows up as being a strawberry-blonde. At one point, Tad Stones, the producer of the show, was contacted by a fan and gave this explanation:

"I believe the intention was sandy-blonde. Because we work with a limited color palette, we pick the closest color to what we want. There was no intention of adding red. I did the first paintings of Gadget and she was completely blonde wearing blue coveralls."

She usually wears a pair of lavender mechanic coveralls, a purple belt, and a pair of dark purple goggles which she keeps on her forehead, when she doesn't need them. A white shirt can often be seen under her coveralls, but it is even more inconsistent than her hair, sometimes disappearing and reappearing within one scene. Though she can occasionally be seen in different outfits matching the situation, she never wears a dress or make-up unless it is part of a disguise

Gadget's personality was based upon the inventive character Jordan in the 1985 movie Real Genius. Gadget is a perfectly normal mouse; she loves solving problems like an obsessed and quirky inventor. Her curiosity and fearlessness drive her to find solutions that others have simply overlooked, and her mechanical savvy makes her incredibly valuable to the team. There are a few people she doesn't like, but those few are typically villains. Gadget has a natural warmth about her that makes everyone welcome and pleased to see her. She's very loyal to her friends and frequently goes out of the way to help them.

At the same time, Gadget is constantly thinking. As exhibited in the episode "Gadget Goes Hawaiian", she has trouble focusing on just one way to do things. However once her focus has come, she can invent at a staggering pace—for instance, her armored gyro-mobile in "The Case of the Cola Cult".

Gadget has her quirks. She thinks so much from an inventor's standpoint that it tends to make her naive at times. She has upset Chip and Dale's romantic advances more than once, simply by not understanding what it was they were after.

When Gadget is excited about her inventions, she's known to use scientific jargon freely and talk at an extremely rapid pace. This tends to leave anyone listening to her clueless as to what she actually meant, but it never seems to bother her.

Gadget can be easily angered at times as well. As seen in "Kiwi's Big Adventure", "The Case of the Cola Cult", and "Dirty Rotten Diapers", Gadget has a limit beyond which her cute veneer is lost and she becomes, well... aggressive. Woe to the villain or anyone else who manages this feat and sets off her berserk button, because once Gadget is riled up, she's a juggernaut—thankfully, such incidents are rare. Regardless, she remains a strong female character. 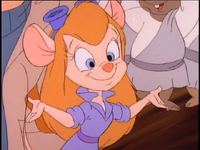 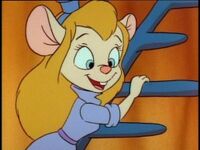 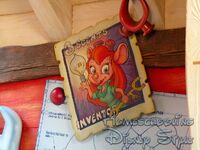 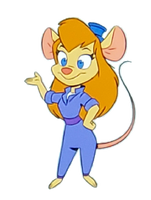 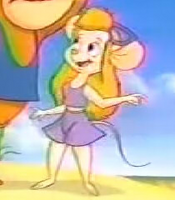 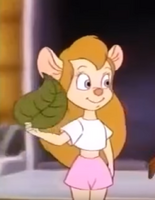 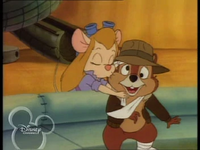 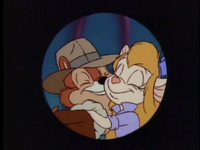 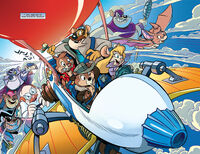