Irking the members of Fairy Tail.

Get a flying cat as a pet.
Protect Fairy Tail and its honor.

Gajeel Redfox is an antagonist-turned-major protagonist in the anime/manga series Fairy Tail. He is an Iron Dragon Slayer, a member of the Fairy Tail Guild and a former S-Class Mage of Phantom Lord. He was initially the only Dragon Slayer in the guild who didn't have an Exceed as a partner, until Pantherlily came to Earth-Land from Edolas and he welcomed him in. Originally a Dragon Slayer from four hundred years past, Gajeel was sent to the future to assist in the destruction of Acnologia. He was first introduced as the secondary antagonist of the Phantom Lord Arc.

Gajeel is a tall and muscular young man with long black hair, which is usually kept slicked back, revealing his forehead. He has red eyes (initially portrayed as green) with slitted dark pupils, and has no visible eyebrows. Most of his exposed body is covered in sets of simple, round studs. The most visible studs are on his face, with three of them above each of his eyes (acting as "eyebrows" of sorts), two on each side of his nose (sometimes mistakenly three in the anime), and two on his chin, just below his mouth. His ears are adorned by two sets of five earrings each.

He also sports four studs on each of his forearms, with his right one being covered in scars. As a member of the former Phantom Lord Guild, he bore his Phantom Lord mark at the top of his right shoulder. After joining Fairy Tail, his black Fairy Tail mark is located on his left arm, just below his shoulder. Being a Dragon Slayer, Gajeel's canine teeth are distinctively sharper than normal.

Gajeel's usual outfit consists of a shabby, black, sleeveless tunic with studded edges, a studded belt around his waist, loose, beige pants tucked inside studded black boots, and a pair of studded brown gloves paired with similarly studded wristbands. He also sports a distinctive wing-like ornament, seemingly made of feathers, jutting upwards, over his right shoulder, attached to his tunic by a large stud.

During the 5th Day of the Grand Magic Games, Gajeel wears a dark blue trench coat, whose tail reaching down to his upper-calves, with a green short-sleeved shirt worn under it, along with beige pants, with a grey belt around his waist, and a pair of black boots. His hair remains the same, albeit with strands of hair on the side of his head, hiding his ears, and wearing a dark yellow bandana on his forehead. He also wears fingerless dark brown gloves, with studs on the knuckles.

When Gajeel first appeared, Gajeel is a cold and apathetic man, not hesitating to injure his own allies if irritated. He iron-clubbed a fellow Phantom Lord Mage who was praising his abilities simply because the latter was disturbing him while he was eating. However, Gajeel is completely and genuinely dedicated to whatever guild he is affiliated with. In fact, he instigated the Fairy Tail-Phantom Lord Guild War simply because, as long time-rivals, he believed that the Fairy Tail Mages were enemies. Upon his recruitment to Fairy Tail, his sense of comradeship seemed to increase. He even went as far as reprimanding Laxus Dreyar, whom he admits to be a more powerful Mage than he is, for attempting to kill Natsu with his Lightning Magic when they were supposed to be allies.

Despite saying that he doesn't wish to make friends, he ironically forms them through his tenacious personality. He believes himself to be a great musician, regardless of what others think of him, and enjoys showing off his metal grinding, glass cracking, and ear destroying voice, like when he chains Mirajane Strauss to a wall to steal her spot as the performing artist for the night. He's also displayed a sense of honor, despite his actions while a part of Phantom Lord; when Shadow Gear confronts Gajeel for the heinous act he committed upon them, he makes himself an open target, acknowledging the terrible act he had done to them, and gave them the opportunity for vengeance. He even protected Levy McGarden after Laxus shot a blast of lightning at her, showing both his compassion for his guildmates, as well as some initial hidden hatred for Laxus.

Gajeel is short-tempered, as seen when he and Natsu bicker over callow things. Like Natsu, Gajeel lives for the thrill of combat, and is visibly frustrated when faced with circumstances where he is denied the opportunity of fighting a skilled adversary, as seen during the S-Class Trials. Despite his cold personality, he has shown a humorous side of himself, as seen when he was shocked to see Mirajane transform her face into his.

Despite his tough exterior, Gajeel is as emotionally vulnerable as any other person. He was noticeably upset upon realizing that he was the only Dragon Slayer that didn't have a cat as a partner. He then desperately tries to find a cat in the alleys, but ends up becoming heavily exhausted. Later on in Edolas, Gajeel finds the partner he is looking for in Panther Lily. Upon arriving back in Earth Land, he cries tears of joy when he discovers Panther Lily also made it, despite his reduced size.

Gajeel has a unique way of laughing: "Gi Hi Hi Hi". And, like quite a few other Dragon Slayers, Gajeel suffers from severe motion sickness, although his case does not develop until the Second Day of the Grand Magic Games in X791 during the Chariot event. 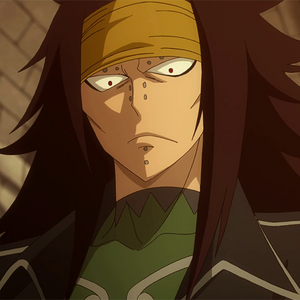 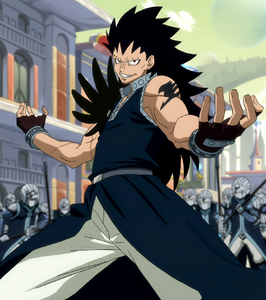 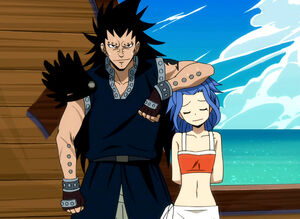 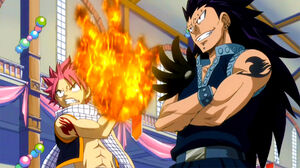