Assist the other Toa Mata to protect the universe.

Gali is one of the main protagonists that appeared in the BIONICLE series. She is a Toa of Water who served as a member of the Toa Mata, the most powerful toa heroes in the Universe. Gali and the other toa nuva were created for the purpose of awakening the great spirit Mata Nui from his coma and help defeat the evil Makuta Teridax.

She was voiced by Kathleen Barr in the Mask of Light movie and Jacqui Fox in the animated series.

Gali is the blue-armored Toa with yellow glowing eyes. Her modes vary in weaponry. She gets propellers for swimming in her Nuva form.

Gali and the rest of her team were created on Artakha, and were later transported to Daxia. When they first awoke, a voice belonging to Toa Helryx explained to them their names and purpose. They were later trained by Hydraxon in combat, teamwork, and skills. Gali fought against Hydraxon in a desert, forcing her to learn battle in an unfamiliar environment. Afterward he set his Energy Hound, Spinax to hunt her down after giving her a few moments head start. Another exercise involved collecting her Kanohi Kaukau from a tree, which she fulfilled with Lewa's help, demonstrating the value of working as a team. Gali managed to quickly befriend most of her fellow Toa, though she and the others were unable to connect with Kopaka.

After they finished their training, the Toa Mata were sent to Karda Nui to protect the Av-Matoran who were working there. The six Toa defended against threatening Rahi, that were being affected by strange energy spikes, as well as sentient lighting storms, Avohkah. After several weeks of fighting the Avohkah, they and the Rahi were finally scattered, safely allowing the Av-Matoran to complete their work and leave Karda Nui. Gali was admired by an Av-Matoran named Takua, who was determined to become a Toa himself.

Tahu and Kopaka later led the others into the Codrex, a spherical building featured on the plains of Karda Nui. A hatch immediately sealed them inside as they entered, and the two Toa were forced to explain their purpose as a failsafe to restore Mata Nui, should anything ever happen to him. The erupting Energy Storms outside forced the Toa to reluctantly enter their respective Toa Canisters, where they remained for thousands of years.

The canisters were intended to be launched into the sky following the events of the Great Cataclysm and land on the island of Mata Nui. However, a malfunction caused the canisters to instead land in the sea around the island. For one thousand years the canisters floated there while the Toa slept, until Takua collected the Toa Stones on Mata Nui and activated a signal which summoned the canisters to the island's shores.

Quest for the masks

Gali's Toa Canister arrived in the waters of Ga-Wahi. She had no memories of her past life beyond her name, and only instinctual knowledge of her elemental power. As she swam through the waters off Mata Nui, she was attacked by a Tarakava. She escaped by summoning a wave which carried her to the shore. From there she entered a dense jungle.

Gali later met the other five Toa, Kopaka, Tahu, Lewa, Pohatu, and Onua, where they began a discussion about their similar arrivals to the island. Gali, who hadn't visited her respective village, Ga-Koro, was informed in detail about the Makuta's hold on Mata Nui and the hidden Kanohi Masks. Knowing it was important to locate these masks, Tahu, Gali, Pohatu, and Onua all argued that it would be best to search in pairs, while Kopaka and Lewa pressed to search alone. Arguments began, until a storm conjured by their nemesis, Teridax, disrupted the conversation. The Toa agreed to separate and individually search for the masks.

Gali left the group briefly to rescue her village from another Tarakava which had trapped her people underwater, and removed its infected mask. Gali began by visiting her village, acquainting herself with the Ga-Matoran and Turaga Nokama. She left soon after defeating the Tarakava, however, to help recover the remaining masks. She later visited the domain of Le-Wahi, where Lewa pulled her away from treacherous waters being manipulated by the Makuta. Traveling underwater to reach her next destination, she was attacked by a Tarakava, and managed to trap it in an underwater cave. She then climbed mountainous peaks to retrieve a Kanohi mask of her own, a Miru. Caught in an avalanche, she used the mask's power to hover slowly to the ground safely. As she landed however, the Toa of Water was ambushed by Nui-Jaga and Tarakava, being saved by the timely assistance of Tahu. During the course of the evened battle, she was struck by a Tarakava and knocked unconscious into the sea. There she experienced a vision of Wairuha and Akamai, who foretold their own coming. Gali washed up onto the shore, where Tahu reassured and informed her of another meeting with the Toa. The meeting was again interrupted by Teridax, who unleashed various Rahi against the Toa, and turned the elements against them. Defeating Teridax's obstacles, the Toa vowed to work together until Mata Nui was rescued.

Gali, Onua, and Kopaka journeyed to Ga-Wahi, and traveled underwater to claim one of Tahu's remaining masks. After subduing a Tarakava, the pair realized a connection between the Infected Kanohi the Rahi wore and their erratic personality.

During her quest, Gali, like each of the other Toa, gathered a Makoki Stone.

After Tahu purposefully lit a tree on fire without thinking of the consequences, Gali became furious with him, as his brash action almost caused harm for the Rahi in the jungle. They dispelled their quarrel quickly, and went with the rest of the Toa to Kini-Nui, where they each received Golden Kanohi. The Chronicler's Company arrived and pledged to defend the sacred location while the Toa confronted Teridax.

Before the six Toa Mata descended, Gali spoke to Takua, and established a mental link with the Matoran, so he could know what was going on with the Toa and chronicle the tale if the Toa successfully return. The Toa descended into Mangaia using the joined Makoki Stones they had gathered. Inside, two guardian Manas struck the Toa who were easily overly matched. Gali and Kopaka reminded themselves of their visions of the Toa Kaita, and the Toa formed Akamai and Wairuha. Realizing the energy towers were sustaining the Manas, they destroyed them, and the Manas went into a frozen state. As the two Toa Kaita drew closer to Teridax's inner lair, they split back into six Toa. The link Gali made with Takua was broken soon afterward, Gali urging the Matoran to find them so that he could fulfill his duty of recording their story. Gali and the others faced the Shadow Toa, defeating them when they accepted them as manifestations of their own darkness. Entering Teridax's chamber, the Toa were approached by the Makuta in the form of a Matoran wearing an infected mask to dishearten and confuse the Toa. After conversing with them, Teridax took the form of a swirling, chaotic void and attacked. Combining their Elemental Powers, the Toa Mata drove the Makuta back. Gaining victory, the Toa were teleported to the surface.

Arriving at Kini-Nui, the ground mysteriously shook, signaling the awakening of the Bohrok. The Toa rushed to Ta-Koro after hearing pleas from the shaken Ta-Matoran Kapura, and found it was being attacked by a swarm of Pahrak and Kohrak. Gali and Lewa combined their powers in a storm to scatter the creatures. Vakama further arrived and explained the legends of the Bohrok. He stressed the importance of gathering the Krana held by Bohrok in order to stop them.

Gali and Pohatu, enlisting the help of Onua and Kopaka, set a trap in Po-Koro, in order to ambush a swarm of Tahnok. When the Tahnok charged across the canyon, Pohatu triggered the trap, flooding the area and allowing Gali to dive into the water and take the Krana from the unwary Tahnok. Though she was able to collect several Krana, the Tahnok soon recovered, forcing Gali and Pohatu to flee.

When Gali and the other five Toa had gathered the eight types of Krana, they descended into the Bohrok Nests. Within, they found six doors with eight slots in front of them and placed the Krana into those slots. The doors opened, and revealed six sets of Exo-Toa armor, which they donned. Gali and her allies soon encountered the Bahrag, queens of the swarms. The Toa used Electro-Rockets to drive the Bahrag together, but realized that they became more powerful the closer they were. In the ensuing battle, the Toa realized that the suits limited their elemental abilities, and vacated them. Combining their elemental powers, they trapped the Bahrag in a Protodermis Cage. The Bohrok queens were imprisoned, and the Toa fell into chambers of Energized Protodermis where they transformed into Toa Nuva.

In this film, Gali first appears waving at her Matoran audience as she enters the Kohlii field in Ta-Koro where Tahu stands. 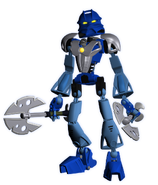 Retrieved from "https://hero.fandom.com/wiki/Gali?oldid=2195518"
Community content is available under CC-BY-SA unless otherwise noted.