The Titan Who Ate Magic

Returning dormant
Getting to fighting

Galio, also known as The Colossus, is a heroic playable champion from the MOBA game League of Legends. The ever-watchful guardian of Demacia, he is a stone colossus made of petricite that guards his countrymen from enemy mages and invaders, coming awake in the presence of magic, and returning dormant after each victory.

The 59th champion added to the game, Galio was released on August 10th, 2010, and received a full visual and gameplay update on March 2nd, 2017. He is most commonly played in the mid lane or as a support.

He is voiced by Josh Petersdorf.

Galio as he appears in Legends of Runeterra. 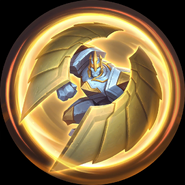