Head of the Thieves' Guild, member of X-Factor, X-Men, Teacher at X-Mansion

Gambit possesses the ability to convert the potential energy of an item into kinetic energy, hypnotic charm, and superhuman agility

Gambit (Remy LeBeau) is a semi-reformed thief and member of the X-Men whose troubled past has sometimes come back to haunt him, on the whole however Gambit has left his past behind and is a hero - sharing an on-and-off romantic interest with Rogue, despite the fact he can't touch her without fear of death.

He is sometimes referred to as the "Raging Cajun" and has the ability to charge objects with kinetic-energy via touch and cause them to explode. He has a liking of utilizing playing cards as weapons via using this power and this trait is what he is most famous for.

Born in the bayou of Louisiana, Remy LeBeau possesses a unique outlook on life — one that has gotten him into quite a lot of trouble with the law as well as with women. Despite his lapses, Remy normally uses his energy-charging abilities for the greater good.

Unlike other X-Men, Remy LeBeau, alias Gambit, walks on both sides of the law. Coming from the Cajun culture of New Orleans, Gambit takes pride in his talents as a thief. He is also a mutant with the ability to charge objects with kinetic energy generated by his body.

Gambit's trademark weapons are the playing cards he throws: imbued with energy, they explode on hitting their targets. A homeless boy living on the streets of New Orleans, Gambit was eventually adopted by Jean-Luc LeBeau, the leader of the legendary Thieves' Guild. Under his foster father's tutelage, Remy grew up to become a master thief himself.

As part of a peace agreement between the Thief's Guild and their rivals, the Assassins' Guild, a marriage was arranged between Remy and Bella Donna Boudreaux. Her brother, Julien, objected to the marriage and challenged the marriage and challenged Remy to a duel. When he wounded Julien, Remy was forced to leave the city to prevent a guild war. Turning his back on his past, Gambit traveled the world, playing his trade as a thief. 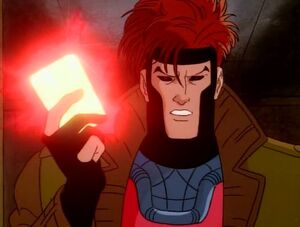 Gambit in the X-Men animated series 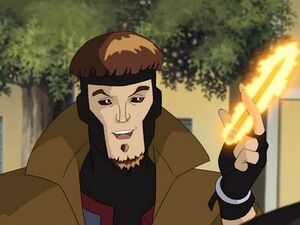 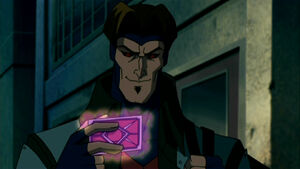 Gambit in Wolverine and the X-Men 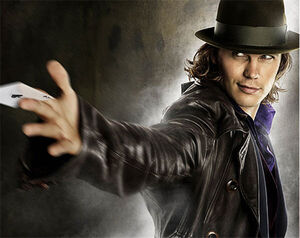 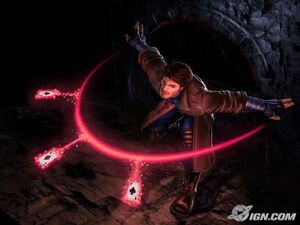 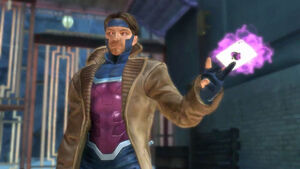 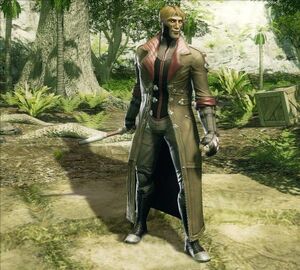 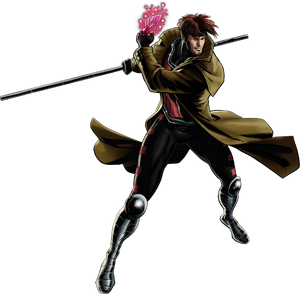 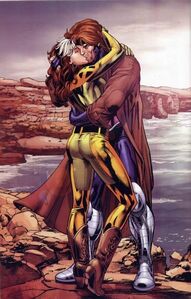 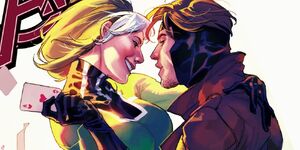 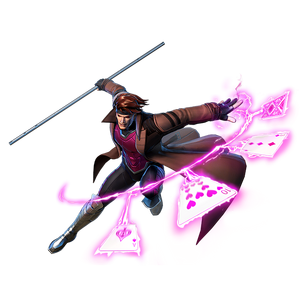 Gambit in Marvel Ultimate Alliance 3: The Black Order
Add a photo to this gallery

Retrieved from "https://hero.fandom.com/wiki/Gambit?oldid=1720992"
Community content is available under CC-BY-SA unless otherwise noted.