Guardian of the Universe

Defeat Gyaos to get revenge on him (succeeded).

Gamera (ガメラ, Gamera) is a giant turtle kaiju who first appeared in the 1995 Daiei film, Gamera: Guardian of the Universe. He is the main protagonist of the Heisei trilogy of Gamera films.

Gamera was bio-engineered as the Atlanteans' Guardian of the Universe. Gamera was sent to wage war against Gyaoses whom hellbent to killed all life on Earth and turned against the Atlanteans to do so. It was also said that Gyaoses were meant to aid Atlanteans to handle their pollution problems, but with pollution declines, Gyaoses sees Atlanteans as their food source and threat to their existence (which may contribute the possibility where they may have outlived Atlanteans' usefulness). Though Gamera managed to win the war, Atlantis has reduced into ruins, and Atlanteans had Gamera entered deep sleep and encased him within time capsule composed of rocks where the said capsule also stored magatama-like objects and a stone epigraph with Atlanteans' message where it said that Gamera is the gift for future civilizations that would help them fighting Gyaoses should they ever returned.

Gamera is portrayed as being actively concerned for the well-being of the planet from the very start, consistent with his creation as a guardian of the Earth. When given the opportunity, Gamera will actively protect humans, especially children. However, Gamera will show a disregard for destruction and death he causes as collateral damage when he is preoccupied with stopping a pressing threat. This is most pronounced in the events of Gamera: Guardian of the Universe when he leaves a path of destruction through Fukuoka while trying to reach the Gyaos trapped in the Fukuoka Dome, and even more so in Gamera 3: Revenge of Iris when he indirectly kills thousands of people while trying to stop two Hyper Gyaos in Shibuya, where in the latter example, he ended up nearly became what he despised had he not take a moment during the battle to actively save a young boy from a Hyper Gyaos. Nevertheless, humanity is still on the list of the lifeform that he swore to protect. 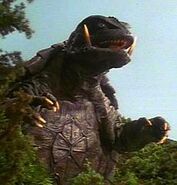