The Gamers Against Weed are a benevolent force in SCP mythos. They are a loosely-organized people who create anomalies for reasons which range from amusement to satirical purposes.

The group organizes almost exclusively over the internet, and has roughly forty members who possesses paranormal powers and are composed primarily of dispossessed or otherwise marginalized individuals aged fifteen to thirty located in the Western hemisphere. Gamers Against Weed originated as a splinter of Are We Cool Yet?, but later abandoned the creation of anomalous art. While several GAW-produced anomalies pose serious threats to secrecy, the threat to human life has been minimal. The group seems to be aware of the SCP Foundation but is not actively hostile towards them.

They are centric figures in the series "Jude's Bizarre Adventure", "Cool and Awesome Ways to Say No to Weed", "Ladies & Gentlemen, We Are Floating in Space" and "The Eternal MxTape".

The Gamers Against Weed was a splinter cell group working for the Are We Cool Yet? organization dedicated to making anomalous art, however the original goal was abandoned and they now work for themselves and only themselves (although they have reproduced Dr. Wondertainment's little misters).

They were founded by AWCY? member Jude Kriyot after he left the group when his friend was killed by an AWCY? exhibition. It is believed that they only want to have fun by using anomalous items for pranks. There have been times where they are shown as empathic people who want to take care of those excluded individuals who were going through tough times. However, they did use one item (SCP-4669) to forcibly convert people to join a socialist militant group, making them a larger threat than usual.

Several items created by GAW have since been designated SCPs by the Foundation.

Relationships with other anomalous groups

The Serpent's Hand and the GAW are generally quite friendly to each other. However, they do not consider each other full allies. jockjamsvol6 is also a member of the Hand, while Jude and Esther are simple visitors to the Wanderer's Library.

The SCP Foundation consider the GAW hostile, and attempt to track down and neutralize the GAW. However, this task has proven more difficult then expected, due to them not having many members and their anomalous capabilities. The GAW generally do not view the foundation with hostility, even though the foundation have repeatedly contained anomalies they have created and arrested GAW operatives.

Global Occult Coalition treats the GAW with hostility due to them being anomalous. However, the GOC show little to no interest at all, and will tend to leave the GAW alone. The Unusual Incidents Unit is also aware of GAW and has pursued some of their anomalies. The Horizon Initiative view GAW in a negative light, but are not enemies.

Because they splintered themselves from the anart group Are We Cool Yet? due the latter's horrible actions, the GAW, mostly Jude, is hostile to the AWCY?, but when the official account of AWCY? was asked what GAW was the account expressed confusion of what they were, implying that AWCY? aren't really aware of GAW.

SCP-4239-1, member of the Misters Against Weed, had slayed many Sarkites in the ancient past, leading to them becoming some of his enemies.

The GAW seems to have a hostile relationship with Marshall, Carter, and Dark Ltd. as they see them as selfish rich people who profit off the poor and don't care about anyone else. This also seems to be the case for Dr. Wondertainment as the GAW has talked very poorly about the toy company and even parodied their Little Misters line.

The GAW seems to have a friendly relationship with Wilson's Wildlife Solutions, as Faeowynn Wilson is a close friend to both Jude and Esther. The GAW has also worked together with Ambrose Restaurant with one of their establishments in BackDoor Soho.

Wren Masterson is also a member of the Church of Maxwellism. Following the collapse of SCP-5470, almost all of the Maxwellists who previously inhabited the anomalous reality, which included MxMasters, were taken under the care of GAW. CommunismAnarchismNihilism may also be a member of the Fifth Church.

In Timeline A-50, the universe's version of the Black Queen was a member of the GAW.

Another online-based group named Gamers For Weed, which originated as a joke by Esther Kogan, formed independently and were determined to keep people from doing drugs unlike GAW. The two groups went into an online "war", surprising each other with memes that made viewers either quit doing drugs or start doing them, until eventually coming to ceasefire.

Icon of Gamers Against Weed 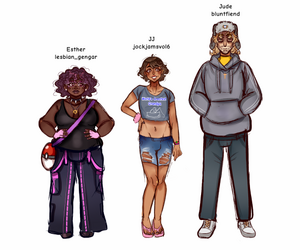 The three notable members of GAW. 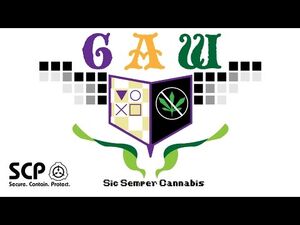 Who or What is Gamers Against Weed? - SCP Foundation Groups of Interest overview