NOTE: This page is for the mainstream version of Gandalf. You may be looking for more info on his Peter Jackson counterpart.

Help Bilbo and Thorin on the journey to reclaim Erebor (succeeded).

Guide Frodo to Mordor to destroy the One Ring (succeeded).
Protect Middle-earth from Sauron (succeeded).

Gandalf (originally a Maiar known as Olórin) is the main protagonist of the Middle-earth legendarium of J.R.R. Tolkien.

He is a very old, wise, and powerful wizard, and one of the five Maiar who entered the world of Arda at the dawn of creation before becoming the Istari. Once a member of the high order of wizards, he travels all around Middle-Earth visiting friends and embarking on journeys. Being thousands of years old, he is known far and wide by all men, elves, dwarves, hobbits, and evil such as Sauron and Orcs. He is the servant of the Secret Fire, wielder of the flame of Anor, which is said where he is to be from. During the Third Age, he guides Frodo in destroying the One Ring and participates in several battles during the War of the Ring. He offers to guide Frodo to Mordor to destroy the Ring and several comrades of all races join them.

Gandalf was originally created by Eru Ilúvatar, who created the universe, as a Maia named Olórin and was accounted as the wisest of them. He served under four of the Valar, named Manwë, Varda, Irmo, and Nienna. When the Valar decided that the Istari, an order of five Maiar in the form of old men) were to be sent to Middle-earth to help the free peoples defeat Sauron, Olórin was included as one of the five Istari.

However, at first, Olórin was too afraid of the mission because he was too weak to fight Sauron, but Manwë convinced him to overcome that fear, which was one of the reasons why Olórin had to go. Manwë insisted that he become the 3rd Wizard, but Varda convinced him to make Olórin the second. Olórin agreed with this, departed to Middle-earth with the 5 other Istari (which they will be known as Wizards in Middle-earth), and went under the name, "Gandalf".

In Middle-earth, Gandalf spent much of his time with the Elves and learned a lot from them. He also continued to gather information about Sauron and eventually suspected that the Necromancer in Dol Guldur is, indeed, Sauron returned. He entered the fortress, but Sauron retreated for a short period of time, and the evil of Mirkwood was greatly reduced. However, Sauron returned to Dol Guldur in the year TA 2850 and has rebuilt his forces. In the same year, Gandalf found Thráin II, the father of Thorin Oakenshield, who was dying after having been seriously tortured. Before he died, Thráin gave Gandalf a map and a key to the Lonely Mountain. Eventually, Gandalf would discover that his worst suspicions (that the Necromancer is Sauron) are true.

In TA 2941, Gandalf already knew that the Necromancer of Dol Guldur is, in fact, Sauron returned and that when Sauron was strong enough, he would attack Rivendell. Unfortunately, the only other power to resist Sauron's forces from Mirkwood to reclaim the kingdom of Angmar was the Dwarves of the Iron Hills. Worse, Gandalf knew that the evil dragon Smaug was still in the Lonely Mountain and that Sauron would attempt to get him to his side and use Smaug to conquer Middle-earth, and Gandalf knew that Smaug had to be killed before the events of the War of the Ring. However, Saruman seemed reluctant to fight Sauron's armies, though none of the White Council knew that he had already become a traitor.

One night, Gandalf visited the town of Bree and found Thorin Oakenshield, son of Thráin, son of Thrór, who was also trying to defeat Smaug. It is revealed that Thorin is trying to reclaim the Lonely Mountain from Smaug, and afterward, Gandalf and Thorin made a plan to draw Smaug out of the Mountain to reclaim it.

Gandalf visited the Shire and met Bilbo Baggins, and tried to convince him to join Thorin's company on the quest to reclaim Erebor, but Bilbo still didn't want to go. He went into his home, and Gandalf sketched a mark on his door. Soon, the company of Thorin Oakenshield arrives, and Thorin himself tells the story of what happened when Smaug took over Erebor. Gandalf then hands over the map of the Lonely Mountain and the key to Thorin Oakenshield.

The next day, Gandalf shows Bilbo a sheet that the Dwarves wrote, which shows that they hope Bilbo will join the company. Bilbo tries to ask a question, but Gandalf tells him that there's no time and that he has to go now. After Bilbo caught up with the 13 Dwarves, Gandalf rode on a white horse, who brought a lot of handkerchiefs, and also Bilbo's pipe and tobacco as well. Sometime after this, Gandalf mysteriously left but came back the next morning to turn the hill trolls Tom, Bert, & William (who were already cooking the Dwarves) into stone with sunlight, as hill trolls turn to stone once the sunlight hits them. In the trolls' cave, Gandalf finds the sword Glamdring.

Eventually, the Company reaches Rivendell. It is here where Lord Elrond revealed the moon runes on Thorin's map, which were vital to their quest to reclaim Erebor; they said, "Stand by the grey stone when the thrush knocks and the setting sun with the last light of Durin's Day will shine upon the keyhole."

Thorin's company then reaches the Misty Mountains, and sees two stone-giants clashing with each other; Gandalf is able to witness this as well. During the thunder battle, they are able to escape and hide in a cave. However, a crack opened at the back of the cave, and Bilbo yelled. Unfortunately, they fell in and were captured by goblins. By this point, the company doesn't even know where Gandalf is. 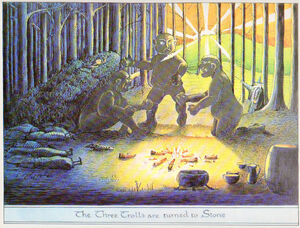 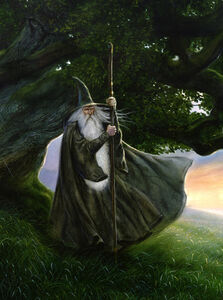 Gandalf the Grey in the woods by John Howe. 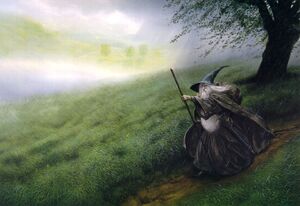 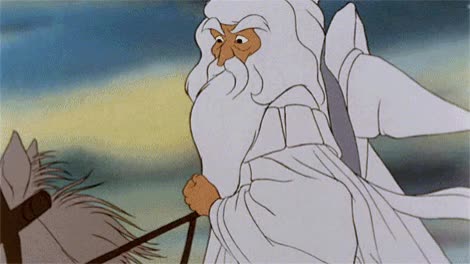 Gandalf as he appears in Ralph Bakshi's The Lord of the Rings (1978). 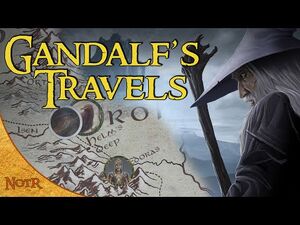