Betrayal Teenage In-Love
Gandra Dee is an anthropomorphic chicken that appears in the DuckTales reboot.

She is first introduced as an independent scientist, but later is revealed to be secretly an an agent of F.O.W.L.

However, it was later revealed that she was just using F.O.W.L.'s mainframe for a virtual reality project she and Fenton were working on.

She is voiced by Jameela Jamil.

Gandra has tan feathers, short dark brown hair and wears punk-rock clothing. She also has nanotechnology installed in her hands to charge up objects or shock people and wears gloves over them.

Being a rebel scientist, Gandra presents herself as rebellious, intelligent, and rude.

Gandra will do what it takes to push the boundaries of science and will come off as immoral and determined, even if it means crossing certain ethical lines such as experimenting on herself with her nanites. However, despite her claims of being against 'zillionaires and sell-outs' she has been working with Mark Beaks to gain funding, showing a hypocritical side to her statements.

Out of all of that, Gandra does have a heart and has a remorseful side, knowing when she has gone too far such as endangering the McDuck family and feeling guilty for betraying Fenton after getting to know him. She also does care for the latter as she was willing to help him to rescue Webby and Huey from Megabeaks.

Later, Gandra is shown to have the belief that scientist should work without being held back by others. Gandra merely used F.O.W.L.'S mainframe to create a virtual reality cloud project with Fenton and planned to quit F.O.W.L. after it was completed.

The Dangerous Chemistry of Gandra Dee!

Fenton first meets Gandra at an electronics store discussing their professions, to which Gandra claims to be a scientist having studied high-energy physics. Fenton then states his role as a scientist at McDuck enterprises, but Gandra is not impressed, believing all they were doing was creating inventions as good as the Gizmoduck suit, which she considered to be nothing but a showoff. Gandra herself claims she never looks up to zillionaires, has no rules or limits to look up to, and sees herself as her own boss. Seemingly intrigued by Fenton's profession, however, she agrees to go on a date with him. It turns out she was working on behalf of Mark Beaks to get the Gizmoduck suit, but she soon finds herself genuinely interested in Fenton and eventually helps him defeat Beaks before escaping.

Gandra is revealed to be an agent of F.O.W.L.

Challenge of the Senior Junior Woodchucks!

Gandra is once again seen attending a F.O.W.L. meeting, where she along with the Board of Directors, Phantom Blot, and Black Heron are spying on Scrooge and his family using a controllable camera designed like a mosquito to avoid suspicion. In the midst of their spying, she and everyone else come to learn of the family having found Isabella Finch's journal of lost mysteries.

She takes control of a high tech robot for Bradford after hacking Scrooge's security code.

The Split Sword of Swanstantine!

Gandra visits the Bazaar with Steelbeak, Black Heron and Rockerduck, in a bid to obtain the parts of the Split Sword of Swanstantine. Gandra faces off against Dewey and Webby while attempting to snatch one of the sword parts, and temporarily blinds both of them with a flash grenade in order to slow them down. However, they persevere and are able to hurl one of her own flash grenades back at her, defeating her and taking the sword part for themselves.

Beaks in the Shell!

Gandra steals a device called an electronic disruptor, but is confronted by Gizmoduck and Huey. When Gizmoduck chases her, she uses a device to prevent his wheel from moving, getting him stuck in an alley. After he corners her on a dock, she throws the disruptor off the dock, but it is caught by Gizmoduck before it can knock out all the power in Duckburg. She then vanishes in a flash of electricity. Later, when Fenton plugs into the Gizmocloud, Gandra is there waiting for him. It is revealed that they planned their earlier scuffle to trick people into thinking that they were enemies so that they could build the Gizmocloud in secret. After kissing each other, she notices a glitch and takes it to her virtual lab to experiment on it.

While she is working, Huey enters the Gizmocloud, sees her, and throws a beaker at her, which she dissolves with a wave of her hand. She covers Huey with a weighted blanket so that he is forced to relax. When Fenton tells Huey that he and Gandra created the Gizmocloud together, she explains that she has always wanted to push the boundaries of science, but it got her in trouble. Because of this, she had to experiment on herself and get funding for her experiments from villains who didn't care how much mayhem she caused. She joined F.O.W.L. so that she could use their resources to help Fenton build the Gizmocloud, which is a virtual lab where people could experiment without being in any danger. She plans to leave F.O.W.L. once the Gizmocloud is complete, and has tipped Fenton off to her missions so that he could stop her.

Later, she argues with Fenton about whether or not to make their project public, claiming that a few bad apples could ruin the whole thing. When Mark Beaks invades and takes over the Gizmocloud, Gandra attempts to electrocute him, but he dissolves the blast and traps her and Fenton in a cage. She convinces Fenton to signal Huey to go get help. During the battle, she gets her own Gizmosuit, which contains metal rods that she can use to electrocute people. After Mark Beaks steals everyone's Gizmoarmor, she insults him. causing him to turn into a balloon. She then helps Huey, Fenton, M'ma Cabrera, and Gyro, who have all gotten their Gizmosuits back, defeat Mark Beaks once and for all. After Fenton publishes the cloud, she takes off her virtual reality helmet, revealing that she's in F.O.W.L.'s mainframe. Bradford apprehends her, tells her that her request to leave F.O.W.L. is denied, and has some Eggheads take her to the lost library.

Huey encounters Gandra, Gyro and Ludwig Von Drake in the Library of Alexandria, and discovers that all three have been taken captive by F.O.W.L. and are in nigh-impenetrable holding cells. Gandra explains that Bradford Buzzard has harnessed the power of the Solego Circuit and has ensured that it will now permanently erase things from reality. Before Huey can warn anyone, he too is captured. Dewey and Louie arrive to rescue Huey, but before they can get away, they are intercepted by May and June, who bring all six prisoners to a dungeon, so that they can keep all of them in lockdown with their other captive: Webby Vanderquack. Gandra tries to resist, but June ties her hands to her face so that she will blast herself if she tries to open fire. When Black Heron makes contact with the group, they all observe the events that are unfolding on the rooftop of the Library: Bradford is forcing Scrooge to sign a contract that will ensure that he cannot continue adventuring. Gandra is horrified when she watches Bradford throw his brothers and Black Heron to their deaths, as are May and June. Gandra is then witness to Ludwig Von Drake's bombshell: that Webby was created from Scrooge McDuck's DNA. When May and June decide to stand by the McDuck family, Gandra and the others are freed from the dungeon. Gyro, Ludwig and Gandra are able to deactivate the Solego Circuit when they arrive on the rooftop -- narrowly saving Donald Duck's life in the process. All three scientists are blasted by a frustrated Bradford, but they are only down for the count momentarily and are seen with all of Scrooge's other allies moments later, when Bradford is defeated. Gandra is then reunited with Fenton on the roof of the Library. Later, on board the Cloudslayer, they are seen kissing one another during the journey home. 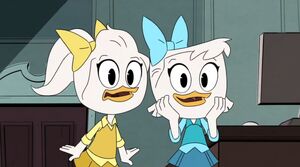