Member of the Spectres

Fighting the Empire
Rivalling with Ezra and Chopper

To find his people and guide them to Lira San. (succeeded)

Garazeb "Zeb" Orrelios, also known by his call-sign Spectre-4, is one of the three tritagonists of the television show Star Wars Rebels. He is a crew-member of the ship Ghost, and is a Lasat, a previously unseen Star Wars species that is based visually on early concept art of Chewbacca. Despite being short-tempered, he steps up and helps his friends whenever they are in danger while also hiding his dark and troubled past. During his early dealings with the Empire, Zeb's entire race was nearly obliterated during the massacre of Lasan until he was recruited by Kanan Jarrus and became a member of the Ghost Crew.

After the Battle of Endor, Zeb went to join his people on Lira San while welcoming old adversary Alexsandr Kallus to see he hadn't wiped out the Lasat race.

Zeb hails from the Lasats, a species previously unseen in the Star Wars Galaxy. Despite his brutish appearance Zeb is deceptively intelligent and sophisticated, also being a trained fighter and warrior who on his homeworld was considered a sort of honor guard and would have been held in high esteem for his fighting ability.

As a member of the ship Ghost's motley crew Zeb maintains ongoing rivalries with both Chopper (who he despises) and Ezra, who annoys him but nevertheless works with him a great deal, leading to an almost childish rivalry between the two but also a budding friendship and bond.

Zeb was a Lasat, meaning he had several interesting traits. His ears, for instance, released heat. His large eyes could see very clearly at nighttime, making for good hunting. Finally, his body was covered by a thick sheet of fur, which kept him warm. Due to his size and strong physiology, Zeb has naturally high strength, and resilience, though his mobility still matches that of a force user. Among the crew of the Ghost, Zeb was considered the muscle, as he is the most physically powerful, enough to use his hand as blunt weapons against armored troopers, as well as throwing and lifting them without effort. He was a well-trained honor guard, who has a past in the military. Much of his fighting style was reminiscent of martial arts as he has been shown practicing sweeping kicks and punches on stormtroopers. In terms of personality, Zeb was typically very witty. During fights, however, he became serious. Otherwise Zeb was often grumpy and rough, particularly towards Ezra (whom he later became close friends with) and Chopper. He is a Rebel to the core, after his people were all but exterminated and ousted from their own planet by the Empire and as such he has great compassion towards those who suffer under the Empire's tyranny as well, such as when he defended a fruit-vendor from harassing Stormtroopers and declined monetary reward and only took a single fruit. As a member of the Honor Guard of Lasan, Zeb is a fierce warrior and believes in honor.

Zeb also has a softer and more vulnerable side like when he flew into a berserk rage when Kallus used a Bo-rifle in battle and in Star Wars Rebels: Spark of Rebellion, Zeb seemed rather depressed (although he tried to hide it) like he would miss Ezra when they dropped him off back on Lothal. At the same time, the Lasat wouldn't hesitate to protect his small family, evident when he saved Sabine and Ezra from the Inquisitors. Because of this role, Ezra and Sabine saw Zeb as an older brother. Because of Zeb's somewhat immature nature at times, Hera and Kanan often considered Zeb as being part of "the kids" with Sabine and Ezra.

After Kanan's death, Zeb became far more hot-tempered, even nearly killing Rukh when he first encountered him. However, Sabine managed to get through to him by reasoning they were not cruel like the Empire. Despite some of Zeb's skeptism, he helped Ezra, free Lothal from Imperial rule and was deeply saddened by Ezra's sacrifice to protect his friends. Following the defeat of the Empire, Zeb had already made peace to Kallus, his former adversary and showed his good friend that he hadn't caused the Extinction of the Lasat race and decided to live peacefully on Lira San.

Zeb wore a yellow jumpsuit with green shoulder pads and carried a AB-75 bo-rifle, which he earned when joining the Lasan Honor Guard, yet became alarmed when he learned that Kallus carried a similar bo-rifle that he claimed to have stolen from another honor guardsman who died during the Genocide of Lasan.

As Captain the Lasat Honor Guard, Zeb was a skilled fighter and fierce warrior who believed in honor and was trained use it effectively, but that part of his life ended when the homeworld he swore to protect was massacred by the Empire.

Due to his large physique and combat skills, Zeb served as the "muscle" of the small Lothalian rebel cell. He enjoyed fighting and beating up Stormtroopers and wrestling against Inquisitors.

Zeb appears in Disney INFINITY's third installment as a playable character. He has also appeared in Star Wars: Galaxy of Heroes. 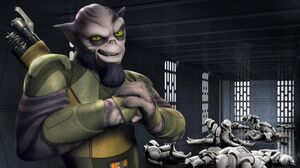 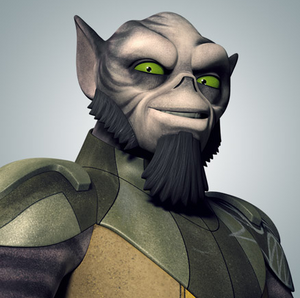 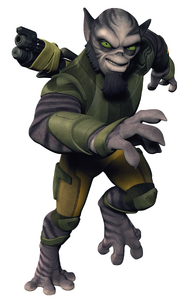 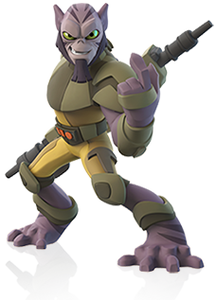 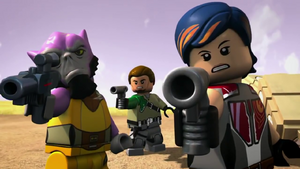 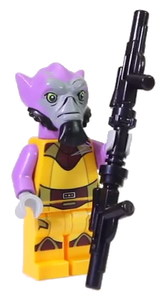 Retrieved from "https://hero.fandom.com/wiki/Garazeb_Orrelios?oldid=1902447"
Community content is available under CC-BY-SA unless otherwise noted.