Psychic Guardian
Gardevoir is a Psychic/Fairy-type Pokémon from Generation III. It evolves from Kirlia at Level 30, after evolving from Ralts to Kirlia at level 20, making it one of the final possible forms of Ralts.

Until Generation VI, Gardevoir was purely a Psychic-type Pokémon; this changed starting with that particular generation, when Gardevoir (along with its previous forms) were added to the newly introduced Fairy-type. In addition, Gardevoir, as well as its male counterpart Gallade were among several selected Pokémon to be given a Mega Evolved form.

Gardevoir is very protective of its Trainer and if needed will risk its own life or create a small black hole that prevents harm before the black hole ceases to exist shortly after; this however causes Gardevoir to lose all of it's psychic power for a undetermined amount of time. Due to Gardevoir's impressive psychic power, they can also see into the future, can make it to where they don't feel the force of gravity and ultimately distort dimensions if needed.

Gardevoir is a very humanoid Pokémon. The majority of its body looks similar to a long flowing dress. It has long arms with only three fingers. A vast majority of the body is white with the exception of the hair, arms, and underside of the dress which all are green and a red almost fin-like horn that comes from the chest and a rounder one located on the back. The green hair covers part of the face and the side of the head. The face has three small spikes located near its red eyes, that causes it's face to somewhat resemble a masquerade mask.

Upon its Mega Evolution, Gardevoir's arms and dress become wholly white and bigger, resembling a wedding dress. In addition, the horn on its chest duplicates into two. Meanwhile the spikes on the side of its head become notably bigger. This evolved form can only be retained during a single battle, as afterwards, Gardevoir will revert to its original state.

Despite appearing female, it is possible for a Gardevoir to be male, although this is not as frequent as females.

In the episode Championing a Research Battle!, Ash challenges Diantha, with the former using his Greninja in the battle and the latter using Gardevoir. Diantha at first has the advantage, but is overestimated later by Greninja's fast attacks and unique transformation, forcing Gardevoir to Mega Evolve. Greninja nearly defeats Gardevoir, but both Pokémon unexpectedly faint once Greninja preformed the finishing move. The battle is then interrupted when Team Rocket kidnaps Gardevoir, but are soon underestimated by its power, and are sent blasting off as a result. Diantha thanked the now exhausted Gardevoir and returned it to its Poké Ball; afterwards she and Ash parted ways. 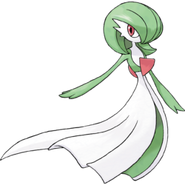 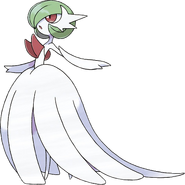 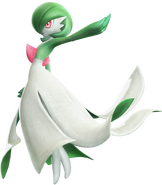 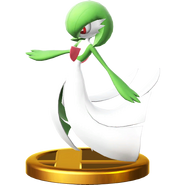