Looking over the world from the roofs and gutters of their homes.

Protect the cathedrals, castles, they lived atop of and their inhabitants from evil spirits and demons.

On & Off Stone Monsters
Gargoyles are stone creatures that line the roofs, gutters, and overhangs of various structures (often of the Gothic architectural style).  At day, they remain inanimate atop of cathedrals, castles, overlooking the area below for any potential trouble (as well as diverting waterflow away from the building to preserve it), but at night, it is believed that the creatures animate, to fend off evil spirits that may invade their (and even their inhabitants') homes.

According to legend, around 600 A.D. St Romanus of Rouen slayed or subdued a dragon-like creature by the name La Gargouille, which had been terrorizing the town of Rouen for centuries. Following Romanus's success, the townspeople burned the monster at the stake, however its head would not combust. The people then decided that instead, they would preserve the creatures head and mount it to the exterior of their church, which has since acted as a ward to fend off other dragons and evil spirits from attacking the town.

Gargoyles are often made of stone, and are located atop various Gothic structures (mainly churches and castles). Their features vary in appearance, ranging from having the appearance of various animals, such as goats or birds, but occasionally will have humanoid features as well. Some gargoyles (though not all) are depicted as possessing wings, indicating that they are capable of flight.

A gargoyle usually does not need to eat to survive, although in pop culture, they may occasionally consume pigeons.

A common belief is that Gargoyles are actually living beings that largely resemble statues, while others are depicted as being demonic vessels.

Gargoyles' main job is to protect the structure(s) they are positioned atop of as well as the structure's inhabitants by warding off evil spirits and monsters being various supernatural means (similar to Jack o' Lanterns during Halloween). On a more realistic take, some gargoyles also act as waterspouts made to divert water way from structures as a means to help preserve them from water damage.

Heroic Gargoyles have made numerous appearances in various forms of media.

Among some of the most well-known fictional gargoyles include Victor, Hugo, & Laverne , a trio of gargoyles from Disney's The Hunchback of Notre Dame, who serve as voices of reason to the film's protagonist Quasimodo.

Another well-known example are the titular protagonists of Disney's Gargoyles, who are led by Goliath; like their traditional counterparts, the team fights off evil monsters to protect humanity.

Outside of Disney, Constable Downspout is a heroic gargoyle who is part of the Ankh-Morpork City Watch, who like most gargoyles of folklore, can remain completely still for entire days as a means to watch over the city he protects.

Gargoyles appear in the Mobile Game Clash of Clans, in which they are called "Minions".  They are a flying unit that costs Dark Elixir and shoots short-ranged projectiles as its form of attacking in-game.  They are also undetectable by seeking air mines.  At the Builder Base location, they are given an upgraded form called "Beta Minions", which give off a green, radioactive glow and have a special ability which allows them to fire the first set of projectiles at a longer range than usual. 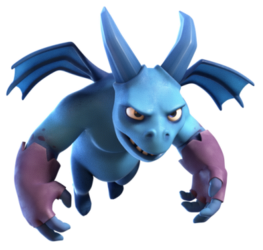 A Gargoyle (under the name Minion) in Clash of Clans. 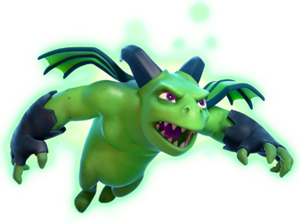 Another Gargoyle (under the name Beta Minion) in Clash of Clans. 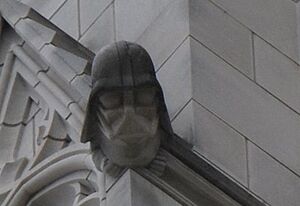 The Darth Vader Gargoyle at the Washington National Cathedral. 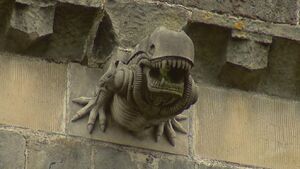 The Alien Gargoyle at the Paisley Abbey.