Dagger (On the lamb alias)

Princess Garnet (to her subjects)

Lead Alexandria Castle
Be with Zidane

Garnet Til Alexandros XVII (alias Dagger and birth name Sarah) is the deuteragonist of Final Fantasy IX, and the heir of Alexandria. Garnet notices a change in her mother, Queen Brahne, and tries to escape Alexandria Castle.

Trying to hide her identity as a princess while traveling with Zidane Tribal, Garnet takes the alias Dagger, inspired by Zidane's weapon. Initially polite and soft-spoken, Garnet becomes wiser and matures as she travels with Zidane, eventually resolving to use her powers as a summoner to protect her kingdom.

Garnet has long, dark brown hair in a low ponytail with a blue clip. After she cuts her hair, it becomes chin-length. She has brown eyes and fair skin. Garnet's casual attire is a white bell-sleeved blouse under a skin-tight, sleeveless orange jumpsuit with corset lacing in the front and back and large white buckles on the thighs. She wears a pair of red leather gloves and red ankle boots. She also wears a black choker and a large crystal suspended from a long silver pendant.

When escaping from Alexandria Castle, Garnet wears a short white cloak identical to the iconic White Mage robe, with a large hood, red triangles along the hood and waist, and red cuffs. Her formal attire is a long white strapless gown decorated with green vine-like leaves from chest to waist. She also wears a gold hair ornament, detached sleeves, a silver crown embedded with green jewels, and a green jeweled necklace. When Garnet enters Trance, her hair turns blonde, her skin turns pink with white glyph-like symbols along her legs, and her outfit transforms into a white leotard with a low neckline and light green sleeves and boots.

Garnet's personality changes over the course of the game, and she grows to become more mature and assertive. At the beginning Garnet is self-deprecating and blames herself for events beyond her control, and relies on others as she seeks help from many people, including Doctor Tot, Steiner, Beatrix, Regent Cid and Zidane. She states she wants the power to summon eidolons so she can better defend her kingdom and her companions. Through Zidane's influence, Garnet learns to act in a more commonplace way, and endeavors to "blend in." She changes her speech patterns from overly formal to more casual and as Zidane teaches her more about the outside world, Garnet falls in love with him. Garnet can be naive, perhaps due to her sheltered life within Alexandria; for example, she is shocked at some of the more unwholesome sights at Treno. Despite her sheltered upbringing, Garnet is quick-thinking and finds ways to outwit others to pursue her goals. 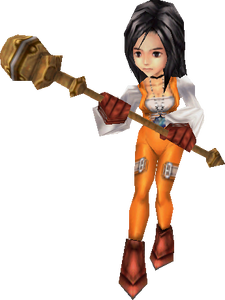 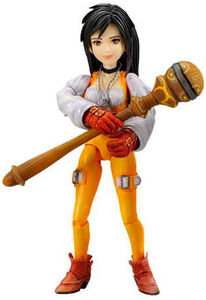