Garudamon is a minor heroes of Digimon Data Squad and partner of Kristy Damon. He is a Ultimate form of Biyomon and his champion form is Aquilamon.

He is voiced by Terrence Stone in the English Version.

Garudamon resembles a giant eagle with a humanid body. He has red wing with yellow on bottom, and a humanid body with an orange-peach color. His hand have silver claws. The bottom of his body is a red color, which have character on them. He also have a yellow feet with silver claws. He has a feather to the top of his head.

Garudamon digivolved from Aquilamon, after taking a hit from GeoGreymon. When Kristy arrived at the scene, Garudamon tried to remember the happy times he had with Kristy. Unfortunately, the madness Garudamon was suffering from was too strong, enraging him to the point that a dark aura surrounded him and making what little remained of his consciousness vanish. He then attempted to kill the girl. But when his attack rendered Marcus's mother unconscious, his sister hopeless and delusional and left GeoGreymon near death, Marcus's anger charged him with enough D.N.A to evolve GeoGreymon to RizeGreymon, who destroyed the possessed Garudamon. Garudamon then became a Digi-Egg and Kristy was glad her friend's suffering is over. The madness was due to Merukimon attempting to remove the feelings and memories that Biyomon had of Kristy which twisted him.

Later on, Biyomon returns and digivolves into Garudamon to protect Kristy from Leopardmon's attack. Garudamon then faces off against Craniamon and King Drasil in the real world. 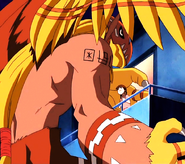