To stop all the world's terrorists

Gary is first seen in the movie performing in a musical called "Everyone Has AIDS", one of the viewers Spottswoode the leader of Team America, takes notice of his skills and after the show he decides to recruit him as a replacement for a former member named Carson, who went KIA. Gary at first declines but then accepts the offer. Gary and the team head to Cairo, Egypt, to infiltrate a terrorist group withing the location, after Gary successfully uses his acting skills to pretend like he's a terrorist, the team kills all the terrorists which in the end leave Cairo in ruins. The Film Actors Guild (F.A.G.), a union of liberal Hollywood actors led by Alec Baldwin (Gary's favorite actor) criticize there actions at Cairo. As the team celebrates Gary tells Lisa about his childhood, and his brother's death, the two express their feelings along with having intercourse. Later on it's confirmed that Panama Canal is destroyed by terrorists as revenge for what happened in Cairo. This causes Gary to fall in deep depression, and leave the team, due to the fact his acting skills once again caused a tragic event. After his departure the team head to Derkaderkastan, but are then captured by terrorists. As Gary becomes more depressed, to the point he begins living the life of an alcoholic. However He is then reminded about his responsibility from a drunken drifter's speech. Gary decides to return to Mount Rushmore (Team America's base), but upon his return, he finds out the base a his been bombed, fortunately Spottswoode and the team's supercomputer named I.N.T.E.L.L.I.G.E.N.C.E. survived the attack. Gary regains Spottswoode's trust by giving him a blowjob and taking a one-day training course, he is sent to North Korea to free the other members with his acting skills. They then find out Kim Jong-il uses a ceremony as a mere distraction for his plans detonate a series of bombs throughout the world, making every a nation a third world country. Gary and the team battle the Film Actors Guild, after they defeat them the team confronts Kim Jong-il while Gary goes on stage, and convinces all the world's to unite as one by using the drifter's speech. After he successfully convinces them Kim Jong-il kills Alec Baldwin with an AK-47. Lisa then kicks him off the balcony, which impales him on a Pickelhaube, and is then revealed to be an alien cockroach from the planet Gyron, and leaves in a small miniature spaceship promising to return to earth. Gary begins a relationship with Lisa, the team then comes together again vowing to fight the remaining terrorists, and await Kim Jong-il's return. 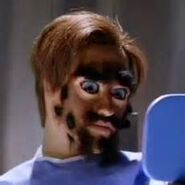 Gary looking at his disguise. 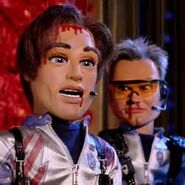 Gary in Spottswoode's Limo.
Add a photo to this gallery
Retrieved from "https://hero.fandom.com/wiki/Gary_Johnston?oldid=1620812"
Community content is available under CC-BY-SA unless otherwise noted.