No information
Gadzilla "Gatchan" Norimaki #1 & 2 are green-haired, cherub-like creature with wings. Originally one hatched from an egg brought home by Senbei from a time traveling trip. Later on it inexplicably replicates into a second one. Gatchan eats almost anything, except for rubber as seen in "Gatchan Goes for a Walk", and particularly likes to eat metal. She/he can also shoot rays from his/her antennae. Gatchan speaks in his/her own language consisting primarily of sounds like "pupipopipi" thatArale somehow seems to understand. It has been named Gatchanism by the manga. Although Gatchan has no defined gender, the manga constantly refers to it as her.

In Volume 17, it is revealed that Gatchan is actually an angel sent by Kami (or the Guardian of Earth, if the story connects withDragon Ball) to prevent further development of the human civilization. After seeing that other civilizations eventually destroyed themselves and the planets they lived on, Kami placed an angel's egg on Earth. Gatchan's ability to replicate as well as his/her fondness of metal should have ensured that humanity would remain primitive and innocent. Seeing that Gatchan failed in the mission (due to Senbei's time traveling intervention), Kami was about to destroy humanity. However, after seeing the life of Penguin Village, he changed his mind and left the earth as it is. Gatchan's real name is a combination of the names of Gamera and Gojira, who is known as Godzilla in the West; hence s/he is known as "Gadzilla" in the English version.

In the remake, Gatchan came out of a strange looking machine instead of an egg. Also, its hair is blonde instead of green. 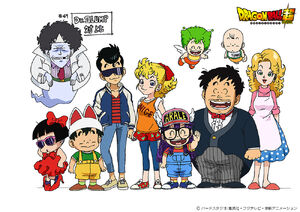 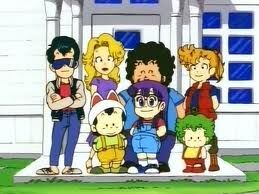 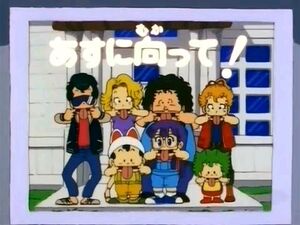 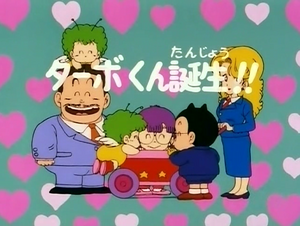