Gertie (daughter)
Miranne (wife)
Jim E (oldest stepdagher) with a huge belly
Frank (brother) who is half Dino-bird, half cat
Cindy (cousin) who is a human-dog hybrid

Gavin is a Dino-bird and the main antagonist turned supporting character in Blue Sky's 11th animated feature film, Ice Age: Collision Course. He is the father of Roger and Gertie. He is voiced by Nick Offerman, who also voiced Metalbeard from The Lego Movie, Norman in the 2016 musical film Sing, and Marshal Weedon Scott in the 2018 animated film adaptation of White Fang.

Gavin is a blue Dino-bird with red feathers, a black beak and greenish yellow eyes.

He also has a blue body and teal-blue scales and a blue underbelly.

At the start of the film, Gavin started off as tough and ruthless and he loves his kids.

He, along with Gertie, dislike Buck, but in the end he spares his life and helps the herd. 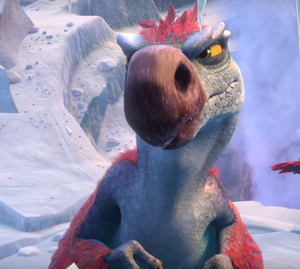 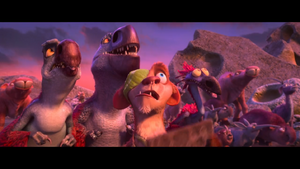 Gavin nearly sacrifices himself to save Roger and Gertie. 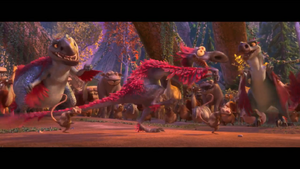