Gemini Sunrise is the lead female protagonists of the video game, Sakura Wars V: So Long, My Love. She is one of the female characters where Shinjiro Taiga can go out with in the end.

In episode 6, it turns out she has a split personality in a form of twin sister, Geminine. Since the death of their master, Mifune, she is seeking revenge. Shinjiro manages to convince her to give up that desire, and Gemini and Geminine reconcile with each other as they ended up being the 6th member of Stars Division.

Gemini is a cheerful but clumsy cowgirl who traveled from Texas to New York on her master's dying wish. She begins the game as the theater's cleaning girl who has dreams of one day performing and becoming a part of the Star Division and becoming a proper lady in the process. She has a very bright and friendly personality though she is prone to daydreaming. Gemini attempts to fit in with the people of New York but has a hard time due to her cowgirl personality. Because of this, she gets easily depressed whenever the other citizens see her as nothing more as a country hick, even considering moving back to Texas. Being trained as a samurai, she has a great love and respect for the Japanese culture and would love to travel to Japan herself someday. 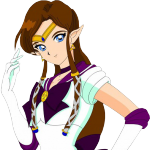