Member of the Night Troops

Gen Shishio is one of the main protagonists of the manga/anime series Kekkaishi. He is a human-ayakashi hybrid, a member of the Night Troops and Masamori Sumimura's subordinate, who was sent to Karasumori to assist Yoshimori Sumimura and Tokine Yukimura in the fight against Kokuboro.

He is voiced by Eiji Miyashita in the Japanese version of the anime and Grant George in the English version, the latter of whom also voices Shinjiro Aragaki and Izuru Kira.

Gen is about the same height as Tokine and has a very serious appearance for a teenager, possessing sharp eyes (due to being half Ayakashi) like an animal's, with sharp spiky black hair (with a green tint), and a darken skin tone. His clothing mainly consists of two outfits, the one he wears during battles consists of a ninja like outfit, with purple pants and a short sleeved robe, which opens slightly at the top, along with a black sash around the waist. On top of a green mesh long sleeved shirt, with guards on both his arms and legs, which have a swirly pattern on them, and plain black shoes. Along with that his outfit also carries The Shadow Organization Star symbol on both the backside of the robe, and on both sides of the front.

During his stay at Karasumori Academy, his regular clothes mainly consisted of the Middle School's uniform, with the only difference being that he keeps the jacket unzipped revealing a orange shirt underneath and various shoes. He also carries a special blue flame tattoo around his body, given to him as a boy in order to keep him from fully transforming, he also has a muscular build (most likely a result from his training with Atora).

After he transforms, Gen's body takes on a Wolf-Man like form, growing taller than he was before, as well as gains brown fur all over his body, with long flowing hair running down his back, the retina's of his eye's become green, and his body gains markings over his face and limbs, and the flame tattoo around his waist changes from blue to red after his transformation.

Gen had a very solitary nature, and was slow to trust or even interact with anyone. He had trouble understanding the way other people behave, and spent a great deal of time observing them and reflecting. He was particularly puzzled by the partnership between Yoshimori Sumimura and Tokine Yukimura (since their families are supposedly still feuding), and could not understand what Yoshimori sees in such a "scary girl." Due to his past and half-ayakashi nature, Gen also had a self-loathing nature, even turning down a girl who asked him out due to a belief she would grow to hate him in the end.

Even when around people he considered friends, Gen only opened up so much. Like Yoshimori, Gen thought nothing of stepping in to save someone despite any danger to himself, though his reasons stem from Masamori entrusting him with his duties, which he felt gave his life purpose. After some time, it was revealed that Gen was reluctant to get close to others out of fear that they might witness his powers, and either label him as a monster or be hurt by him. 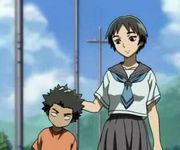 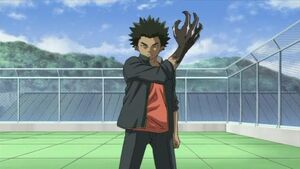 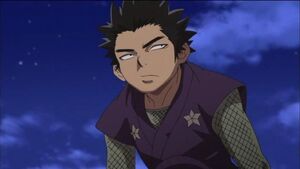 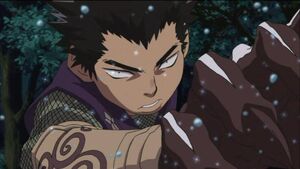 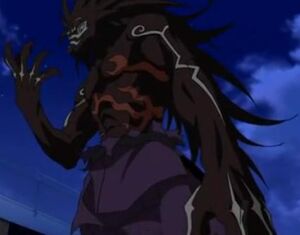 Gen in his full transformed state 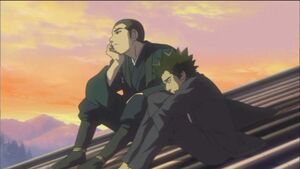 Gen and Masamori
Add a photo to this gallery
Retrieved from "https://hero.fandom.com/wiki/Gen_Shishio?oldid=1704046"
Community content is available under CC-BY-SA unless otherwise noted.