Outlaw knight of the brotherhood without banners Lord of Storm's End.

Swordsmanship
Skilled with the warhammer (TV series only)

Loyal Warrior
Gendry Baratheon is a character from the A Song of Ice and Fire book series written by George R.R. Martin and the television adaption of this series Game of Thrones.

Gendry was born in King's Landing, one of the countless unacknowledged bastard children of King Robert I Baratheon and an alehouse worker. Growing up, Gendry never knew his father's identity, and his mother died when he was a young boy. He was taken on as an apprentice by master smith Tobho Mott, after a man in disguise paid twice the customary fee for Gendry's enrollment.

A Game of Thrones

Gendry is approached by Hand of the King Eddard Stark, who in the process of investigating his predecessor Jon Arryn's death is visitng the people Arryn met shortly before his death, among them Gendry. Robert immediately recognizes Gendry as Robert's son, and tells Tobho Mott that if Gendry ever expresses any interest in wielding a sword, he should send him to Ned. Ned compliments a helmet Gendry has made in the shape of a bull's head, and offers to buy it from him. Gendry refuses, telling him he made it for himself.

A Clash of Kings

After Eddard Stark's execution, Gendry is taken by Yoren to join the Night's Watch. Unbeknownst to Gendry, this is done to protect him from Queen Cersei, who is in the process of having all of Robert's bastards murdered. Gendry travels North in a retinue with several other prisoners, among them a disguised Arya Stark; Ned Stark's daughter.

Queen Cersei's men hunt Yoren down however, and demand that he turn Gendry over. Yoren refuses, and with the help of his recruits manage to drive the men away. Gendry and Arya become friends, after Gendry deduces that she's a girl, and a highborn one at that.

The recruits are eventually captured by the Mountain's men, who take them to Harrenhal, where Gendry works as a smith. Arya begins to form a plan to escape the castle, and convinces Gendry and fellow prisoner Hotpie to come with her.

A Storm of Swords

When travelling towards Riverrun, the home of Arya's mother's family; the Tulleys, the trio are ambushed and captured by the Brotherhood Without Banners. Gendry is impressed with the Brotherhood's ideals, since they fight to protect the common folk who cannot defend themselves in times of war. Despite Arya's attempt to get him to flee with her, Gendry joins the Brotherhood and is knighted by Ser Beric Dondarrion himself, becoming Ser Gendry of the Hollow Hill.

A Feast for Crows

While on a quest to find Sansa Stark, Brienne encounters Gendry working as a smith at the Crossroads Inn. She is shocked by his striking resemblence to Renly Baratheon (King Robert's younger brother), but before the two can have words she is attacked by Rorge and Biter. She slays Rorge, only to be overpowered by Biter, and is eventually saved by Gendry, who kills Biter with a spear through the neck.

Gendry is a young man in his teens. He has his father's blue eyes and thick black hair. He is tall and very muscular (also like his father). He is known for his stubborness, which along with his strength earns him the nickname "The Bull". He is also easily confused. 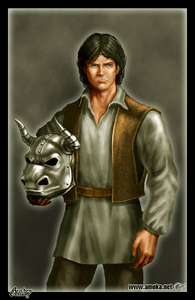 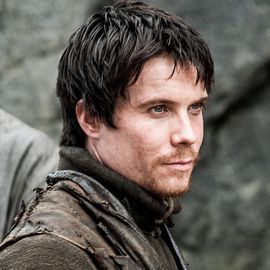