Using his military experience in a negative way

To receive $100 million from the Grand Cayman 'Red Sea Trading Company' (a military slush fund where the Pentagon keeps proceeds from illegal arms deals) and distribute them to the families of the fallen Marines, including his men (originally)

Brigadier General Francis Xavier Hummel is the anti-hero of the 1996 action-thriller film The Rock.

Hummel is a rogue USMC Force Recon ranking officer who, displeased with the U.S. military's poor regard for its fallen Marines, seizes 15 V.X. gas rockets to hold the city of San Francisco hostage unless the payment for the Marines' families is given.

He was portrayed by Ed Harris.

Little is known about Hummel's early life other than being born in the United States of America. At the unknown point of time, he joined the United States Marine Corps and was recruited into Force Reconnaissance. He was married with Barbara Hummel (born October 17, 1946) before she died from unknown causes in March 9, 1995.

When Hummel was a Major on that time, he served three tours in Vietnam, Panama, Grenada and Operation Desert Storm during his career. He eventually achieved the rank of Brigadier General. Then, he made another deployment in Northern Laos and Southern China. As he stated to the Chief of Staff, Hayden Sinclair; he ran black operations in China and his men were responsible for over 200 hostile kills on Hayden's 9th birthday. As a result of his actions, he became a hero and received a number of awards like three Purple Hearts, two Silver Stars and a Congressional Medal of Honor.

However, Hummel began to crumble within upon seeing the way his country treated the men who fought for it: he saw many fine Force Recon Marines die on illegal field operations around the world, and the U.S. government, in order to keep the missions off public record, covered up their deaths, denied compensation such as posthumous medals for the fallen Marines and military benefits for their families, and even sometimes left their bodies to rot in the foreign countries the missions took place in. Even worse, Hummel was forced to be the one that had to choke on these lies and atrocities during his whole career. Finally, after many failed attempts to get his fallen men the recognition they deserved via the proper channels, Hummel eventually decided that drastic measures needed to be taken in order to get the U.S. to respect its soldiers again.

After giving a new bouquet of flowers and a sympathetic statement to his late wife Barbara at her grave, Hummel and his second in command Major Tom Baxter led a group of rogue Force Recon Marines in a plot of stealing 15 V.X. gas rockets from the Naval Weapons Depot, in which he lost one of his own men in the process. On a tour of Alcatraz Island, Hummel and his men captured 81 tourists and the tour guide, except the children whom he politely asked them to go home with their teacher. After that, he threatened that he would launch the V.X. gas rockets toward San Francisco unless the government paid $100 million from a military slush fund, which he would distribute to his men and the families of the 83 Marines who lost their lives for his cause.

Upon hearing that a U.S. Navy SEAL team arrived with an FBI chemical specialist Stanley Goodspeed and ex-SAS Captain John Patrick Mason involved, his men killed them all (except for Goodspeed and Mason) despite his orders not to shoot. When the situation got out of control, he threatened that Goodspeed and Mason return the guidance chips or he would kill a hostage. The protagonists were both captured and placed in prison cells, but they later broke out.

At the same time, Hummel was pressured by Baxter and their newest recruits -Captains Darrow and Frye- into proceeding to launch a VX rocket. He reluctantly agrees, though is left contemplating on the escalating situation during this preparation - leaving Baxter and Darrow to authorize the launch whilst Frye and Sergeant Crisp finalize its proceedings. The launch eventually commences, but Hummel quickly changes the coordinates that causes the rocket to land in the ocean. His men, surprised at Hummel's change of heart, subsequently confronted him and argued over what went wrong. He then reveals that the "mission" was all a hoax to test the government into calling his bluff - which they did, and so Hummel declares the mission is over: as Hummel never really intended to destroy San Francisco or harm it's population. Although Baxter was understanding with his superior's argument, Frye and Darrow were enraged about not receiving the ransom money and ended up leading a mutiny and turning on Hummel, demanding to be paid what they were promised - forcing Crisp to detain him. Tensions rise before Baxter fires a shot at Darrow, sparking a gunfight. Hummel and Baxter managed to kill some of the traitors before Darrow and Frye mortally wounded the general - who reluctantly shoots Crisp dead, and killed Baxter. Moments later, Goodspeed and Mason intervene in Hummel's defense - pulling him to safety. As he succumbs to his wounds, Hummel tells Goodspeed the last V.X. rocket's location before he dies.

Despite Hummel's unfortunate and untimely death, Goodspeed was able to avenge him and Baxter by killing Frye and Darrow himself before going on to stop the V.X. rocket launch - thus ending the threat once and for all.

Hummel and his men.

Hummel before the rocket launch. 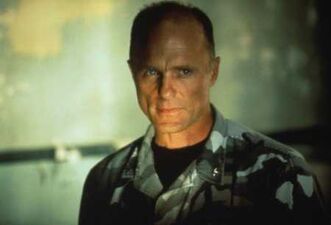 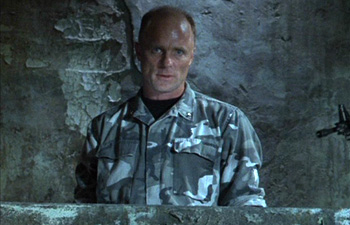