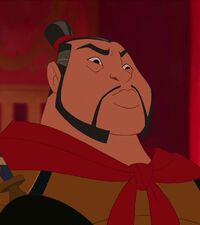 He was voiced by the late James Shigeta.

Li was next seen at the military camp where new army recruits are meeting. In a tent, he talks about war plans with his son, Shang. Li reveals his intention to go to a nearby mountain pass to guard it from the Huns, as it is the quickest way to get to the Imperial City. After promoting Shang to captain and tasks him to train the new recruits, he and the army leave from the camp. Chi-Fu is tasked with observing the training and giving the new recruits permission to join the regular army when he feels they are ready.

Later, when Shang and his troops arrive in the mountain pass where the army is supposed to be, they find out that the army have been attacked by the Huns. While searching for survivors, Chien Po finds out that General Li is surrounded by the dead. Chien Po brings Li's helmet to Shang as proof. Taking a moment to show deep sorrow, Shang sets up a makeshift shrine to regard his father with great respect. Mulan places a doll at the monument to honor every lives that were lost. His death was eventually avenged after Shang helped Mulan kill Shan-Yu and the Huns.

Li and his army leaving the camp.
Add a photo to this gallery
Retrieved from "https://hero.fandom.com/wiki/General_Li?oldid=1217561"
Community content is available under CC-BY-SA unless otherwise noted.