General Warren R. Monger or General W.R. Monger simply General Monger is a supporting protagonist of Monsters VS. Aliens. He is the man in charge of Area Fifty-Something, where the monsters were imprisoned.

He is voiced by Kiefer Sutherland in the film, Kevin Michael Richardson in the TV series, Fred Tatasciore in the video game.

General Monger was raised in Danville, Virginia. He graduated from West Point with a Bachelor of Science and a minor in Monster Capture.

Monger was a captain, not yet promoted but he did have his signature posters all over the base. When the monsters invited Monger to B.O.B.'s birthday party, he was unaware of B.O.B.'s newly acquired telepathy. After forcing him to confess to a secret access panel to their cells, the monsters make their escape. Monger battles the monsters until they reach an aircraft and fly for an insignificant amount of time because B.O.B. mistook the plane for his birthday Pinata. With their ride ruined and B.O.B. losing his new powers, the monsters have no choice but to admit defeat. Monger happily sends them to their cells, and enjoys the latter half of B.O.B.'s birthday party.

After her transformation and military arrest by soldiers, the General gives Susan a tour of Area Fifty-Something. 3 weeks later, a Robot Probe arrives on earth and defeats the army's defenses, leaving no other ideas for the army to attack it head on. General Monger meets with the US leaders, including President Hathaway, to discuss his plan. On the screen in the meeting room he displays pictures of the monsters, which Miss Ronson screamed at when she saw them. When he showed a film of Ginormica, the President screamed. His plan is to send the Monsters to destroy the probe. Monger then went back to the monster prison, and told the monsters they were getting out. He discusses what he asked of the monsters, and also added that they would be freed.

After the robot was destroyed, Monger takes Susan and the others to her hometown, stating that he "called [her] family to let them know [she] were coming home. [He] also called the Modesto PD; told them not to shoot at [her]."

Later, when When Insectosaurus is seemingly killed by Gallaxhar and Susan is captured, Monger gives the remaining monsters Jetpacks to board the giant Spaceship to rescue Susan. As the ship began it's self-destruction, the monsters were greeted by the wonderful sight of the General riding the revived Insectosaurus, now Butterflyosaurus. With their freedom secured, Monger soon informs the monsters of Esgargantua approaching Paris, France, granting Susan's wish of visiting the city. His operation soon promoted him to President's senior security staff. He's last seen berating the President when he presses a vital button.

He informs the monsters about the alien "pit stop", and sends them to check on it. Later on, he shows up to congratulate them on their victory, saying that he loved the smell of pumpkins.

Night of the Living Carrots

When he appears on sight, he fights the carrots single-handedly and everyone, especially himself believe he would be victorious. Instead, he is overwhelmed by the enemy, becomes a zombie and like everyone else, he is saved by B.O.B. 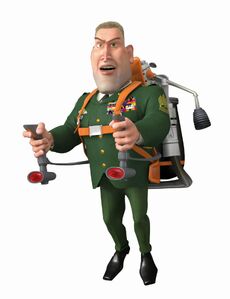 Retrieved from "https://hero.fandom.com/wiki/General_Monger?oldid=2285387"
Community content is available under CC-BY-SA unless otherwise noted.