Leader of Corneria and the Cornerian Army

Lead Corneria to a brighter future.

General Pepper is a major character from the Star Fox series. Serving as one of the deuteragonists, he is one of Fox McCloud's closest friends. General Pepper is the kind-hearted leader of Corneria City and the military leader of the Cornerian Army. After the confrontation with the Aparoids, he was infected and turned, but managed to call out to his friends to finish him off and thus avert his transformation, but he is saved by Peppy Hare and subsequentially taken into medical care. Ever since, Pepper has fallen ill from his contact with the Aparoids, leading him to retire his position to former Star Fox Team pilot Peppy Hare. He serves as the guide in most games, barring Star Fox Command.

Pepper takes his design from a bloodhound. He wears a red general suit with medals of honor adorning his uniform.

Pepper has a strong sense of justice and honor, the latter contributing to his desire to be killed rather than infected and transformed into an Aparoid, although he is saved and recovers, hinting at a strong will. He is faithful to the Cornerians and he will do what it takes to keep the peace and will not take kindly to anyone who harms them. When Peppy returns alone after Pigma had betrayed him and James went missing, General Pepper was ashamed for sending the team to investigate a strange occurrence on the planet, Venom where Andross was exiled to, and took full responsibility in managing Fox's career in any way he can.

General Pepper appears in Super Smash Bros. Brawl as a trophy and sticker that boost the hand and foot attacks by 5 to any fighter.

General Pepper appears in Super Smash Bros. for 3DS as a trophy.

General Pepper is a spirit in Super Smash Bros. Ultimate, A advanced-ranked support, he can He can be obtained by either defeating him in a "World of Light" exclusive spirit battle, which is against Fox who has a suddenly final smash on corneria, or summoning him using cores of Roy Campbell and Labrador Retriever. 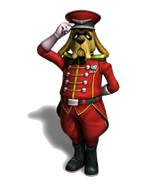