Banishing the Nonets to the Doom Dimension

To protect his creations by banishing The Nonets to the Doom Dimension (succeeded).
Kill Mechtavius Destroyer (succeeded).

Supreme Being Dragon
Genesis Dragonoid, better known as the Original Dragonoid, is the creator of the original Vestroia and ancestor of all Bakugan, his appearence is a Blitz Dragonoid who banishes the Nonets to the Doom Dimension, he appeared in Bakugan: Gundalian Invaders as an minor character along with Dharaknoid and in Bakugan Mechtanium Surge as an one of the supporting characters. He is one of the first two Bakugan created by Code Eve.

He is the great Original Dragonoid and he created the original Vestroia. He is the ancestor of all Bakugan. He gives birth to all Bakugan with Code Eve's powers to create all alien life called Bakugan in order to protect his creations from the Nonets who are banished to the Doom Dimension by him for breaking the law. Genesis Dragonoid is a Blitz Dragonoid who is the ancestor of Drago (Dragonoid). Drago has inherited his ancestor's powers and become stronger. Genesis Dragonoid fights his rival Dharaknoid to assume the safety of his creations he created. Genesis Dragonoid creates Vestroia when his rival Dharaknoid creates Gundalia and Neathia.

He first appeared in Genesis during Dragonoid Colossus' story about the beginnings of all Bakugan. 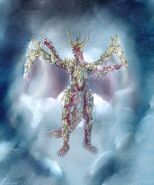